Perovskite solar cells have become commercially attractive because of the potential of achieving even higher efficiencies and very low production costs. However, the challenge lies in its short- and long-term stability.

Scientists led by Dr. V. Ganapathy from International Advanced Research Centre for Powder Metallurgy and New Materials, an autonomous institute of the Department of Science & Technology (DST), Government of India, have increased the efficiency and stability of Titanium dioxide (TiO2) nanorods based Perovskite Solar Cells (PSC) by varying the length and porosity of the TiO2-Nanorods. They did this by establishing a correlation between the lengths of the TiO2-NR and the porosity of the electrode for the ambient processed PSCs.

The team explains that porosity of the electrode plays a vital role in perovskite infiltration and sensitization. The inter-pore distance between the two TiO2 nanorods determines the photo-electrode’s porosity, and the porosity varies as the growth of the nanorod length increases.

“In this work, we had precise control over the length, porosity, and morphology of the TiO2-NR from compact film to nanostructured film.”

The team controlled nanostructures of the TiO2-NR by varying the concentration of the titania precursor and the growth time. The power conversion efficiency for nanorod-based PSCs was enhanced with variation in the length and porosity of the TiO2-NR. The interspacing between the TiO2-NR facilitated deep infiltration of the perovskite during the spin coating and is locally confined to the surface of the TiO2-NR. Due to the large pores present in the TiO2-NR photoelectrode, infiltration of small molecular HTM was also enhanced. The present work was published in the ‘Journal of Alloys and Compounds’,

The PSCs prepared with 350nm TiO2-NR exhibited better efficiency when compared with the conventional NP-TiO2. The similar thickness of NP-TiO2 based device exhibited less photocurrent value than NR-TiO2, which was attributed to the dense packing of 20nm TiO2 particles inhibiting the loading of perovskite. The high crystallinity of the TiO2-NR provided a low resistance to the flow of electrons in the Electron transport layer (ETL).

In the current work, apart from high efficiency, the crystalline structure of ETL also significantly influenced the stability of PSCs.

“The decomposition of perovskite absorber is a critical factor behind the performance degradation of PSCs. Given the similar nature of perovskite, enhanced stability of TiO2-NR PSC is attributed to slow ion migration across thermodynamically stable rutile TiO2-NR/MAPbI3 interface,” added Dr. V. Ganapathy. 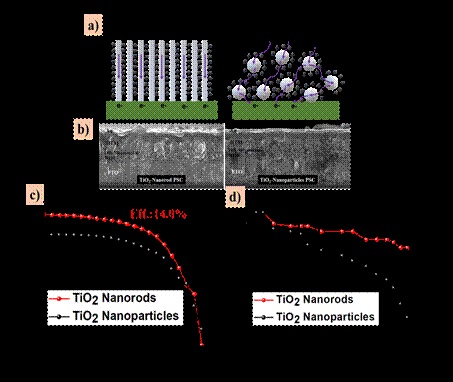