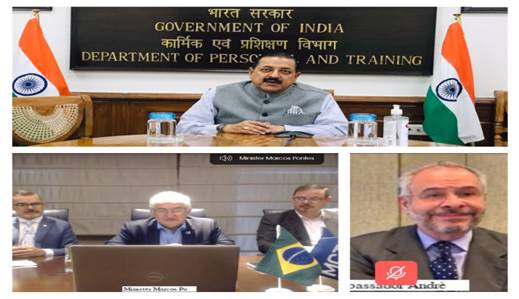 India’s ascent to the World Comity of Nations will happen via Space Technology: Dr Jitendra Singh

New Delhi: Union Minister of State (Independent Charge) Development of North Eastern Region (DoNER), MoS PMO, Personnel, Public Grievances, Pensions, Atomic Energy and Space, Dr. Jitendra Singh said today that India’s ascent to the World Comity of Nations will happen via Space Technology. In a virtual interaction with the visiting Brazilian Minister of Science, Technology and Innovation, Marcos Pontes, and the heads of the Brazilian Space Agency after the successful launch of Amazonia-1 satellite of Brazil by ISRO yesterday, Dr Jitendra Singh said that collaboration between the two countries mark a beginning of robust bonding and is a role model for other countries to follow. He said, the launch also marked the first dedicated mission of ISRO’s commercial arm NewSpace India Ltd. (NSIL).

Dr Jitendra Singh said, Prime Minister Narendra Modi provided a special impetus in the last 5-6 years to all the scientific pursuits including Space Technology and added that the extension of applications of Space Technology to different sectors and areas brought ‘ease of living’ for common man. He said, whether it is railways or smart cities, agriculture or disaster management, highways or defence, Space technology is contributing in a big way.

Referring to Prime Minister’s revolutionary decision to “unlock” India’s Space Technology to private players for the first time after independence, Dr Jitendra Singh said that this will bring ‘ease of living’, ‘ease of environment’ and ‘ease of humanity’. The Minister said, while India began its Space journey much after several other countries, but today we are in a position to provide inputs from Mangalyaan and Chandrayaan to the premier institutions of the world like the NASA of the USA.

In his address, Brazilian Minister of Science, Technology and Innovation, Marcos Pontes said that India- Brazil joint venture in Space Technology will offer new opportunities for companies and will help create new jobs. He said that Amazonia-1 is an optical earth observation satellite and is intended to provide remote sensing images to observe and monitor deforestation, to improve the real-time detection system of deforestation in Brazil, especially in the Amazonia region, and to monitor the diversified agriculture throughout the country. The Minister said that new satellite would open the door for multiple business, trade and governmental opportunities. Brazil has also requested for India’s support in procurement of material and systems for its launch vehicle programme.

MoUs and Joint Working Group (JWG): Since early 2000s, India and Brazil have signed cooperative instruments for exploration and peaceful uses of outer space, both at the government level (2004) and space agency level (between ISRO and Brazilian Space Agency AEB in 2002). In line with the provisions of the agency level MoU, JWG was formed in 2007. The JWG (reconstituted with new members) had a meeting in January 2020. Cooperation possibilities in future space science missions, utilizing ISRO’s PS4 orbital platform, space weather studies etc. were discussed