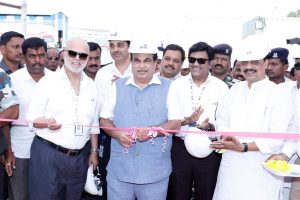 Mr Gadkari reiterated the government’s initiatives in this direction: “It is heartening to see indigenous innovation emerging from Praj Industries yet again. Today I witnessed India’s first 2nd generation bio-refinery demonstration plant and my belief in India’s capability in technology development as compared to the Western countries, has strengthened manifold. Biofuel is not only cost-effective, but also a pollution-free import substitute of Rs 7 lakh crore. Our Government has initiated dialogues between my ministry, Petroleum Ministry and Renewable Energy ministry to present a comprehensive blueprint and is now with the Prime Minister for consideration. There are multiple benefits that can accrue to the government, farmers, industries and consumers.”
He further added, “Agricultural diversification is the need of the hour, wherein agri waste will generate additional revenues to the farming community. Waste to wealth is the new mantra that emerges from Praj’s innovative world-class 2nd generation ethanol technology.”
Speaking on this occasion, Mr Pramod Chaudhari, Executive Chairman, Praj Industries said: “We are honoured that Praj’s 2nd generation bio-refinery demonstration plant is inaugurated by Mr Nitin Gadkari, who has been strongly supporting renewable fuels for transportation. We have been working on 2nd generation ethanol technology for over 7 years and this plant is a testament of our technology leadership in the bio-energy space.”
Mr Chaudhari further stated, “This innovative technology has substantial potential to enhance energy security and help India become energy self-reliant. It uses abundantly available cellulosic biomass while effectively addressing the challenge of agricultural waste management and mitigating pollution. Commercialization of 2nd generation ethanol technology will give an impetus to rural economy and create additional employment opportunities.”
Praj’s second generation bio-refinery demonstration plant will produce 1 MLPA ethanol by processing a variety of agri-residue like rice and wheat straw, cotton stalk, bagasse, cane trash, corn cobs & stover, etc with superior product yields. With continual research and development, further pipeline of other renewable fuels and chemicals is underway to be produced from this technology platform.
In India, an eco-system for 2nd generation ethanol is in the making to achieve the aspired 20% blend ratio. As a part of this drive, 10 to 12 Second generation ethanol projects are expected to be finalized, with average capex of around Rs 600 crore each. Each of these plants will have the capacity to produce 100,000 litres of ethanol per day.
Praj is at the forefront of this development and has already signed MoUs with IOCL and BPCL as their technology partner for certain project sites. Meanwhile experts from Oil Marketing Companies (OMCs) and their engineering consultants have already visited demo plant and endorsed the success of Praj’s technology.

DSC Throws Light on Communication Dynamics in the Rural Framework