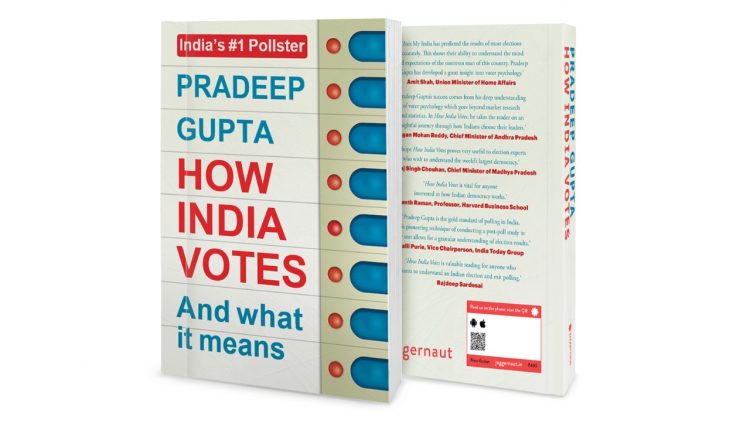 India’s foremost Pollster, Pradeep Gupta launches his new book ‘How India Votes: And What It Means’

Mumbai: India’s leading psephologist and CMD of Axis My India, Pradeep Gupta, today announced the launch of his new book ‘How India Votes: And What It Means’. The book chronicles the nature of Indian elections and demystifies how and why Indians choose their political leaders by unravelling rich truths basis field interviews and analysis.
Published by Juggernaut, Gupta’s second book discusses the impact of polarization and GDP in election results, role of smartphones in influencing Indian politics, importance of women as a distinctive voting bloc in some states and several others key factors.
The book is a thought provoking, enjoyable and educative read and has been highly appreciated by the stalwarts from the political, educational and media ecosystem for providing a fine understanding of election results, the sentiments of the voters and uncovering the challenges of the world’s biggest democracy.
Commenting on the launch, Mr Pradeep Gupta CMD of Axis My India, said, “Far too often, the dynamism surrounding Indian elections is not understood fully. A number of observers, both in India and overseas, appreciate that elections in India are a lot more complex than most geographies around the world but the complexity involved is perhaps not fully understood by even the most seasoned journeymen. This book is a humble attempt at decoding the Indian electorate as we look to understand the thought process of our junta and exit polls digging the farthest corners of the country. It encapsulates the various effects of political, economic, technological and social aspects on the common man and how it in-turn effects their voting psychology. I am hopeful that the book would leave its readers a lot more knowledgeable and insightful on the dynamics surrounding polling in our beloved country.”
Gupta and Axis My India are considered gold standard for their exit poll analyses, since 2014 and the book is a reflection of their rewarding efforts in understanding voter psychology using their well-recognised election forecasting model which was recently included as a case-study in the prestigious Harvard Business School curriculum. The case study, now a part of HBS’s classroom course on elections, highlights the complexity associated with successfully predicting elections in the world’s largest democracy, its diversity evident to all, with varied geographies, shared borders with six nations, sprawling rural populations and 23 different languages spoken across the country.
Earlier to this Gupta has also published Blueprint for an Economic Miracle’ in 2018.

University of Nottingham: Ultrasound at the nanometre scale reveals the nature of…

iednewsdesk Sep 18, 2021
Researchers have developed a new method to measure force and atomic bonds at the nanoscale that reveals that the…

The University of Sheffield: Emotion, energy and hope! Leading light…

The University of Sheffield: New gene therapy pathway could protect us…