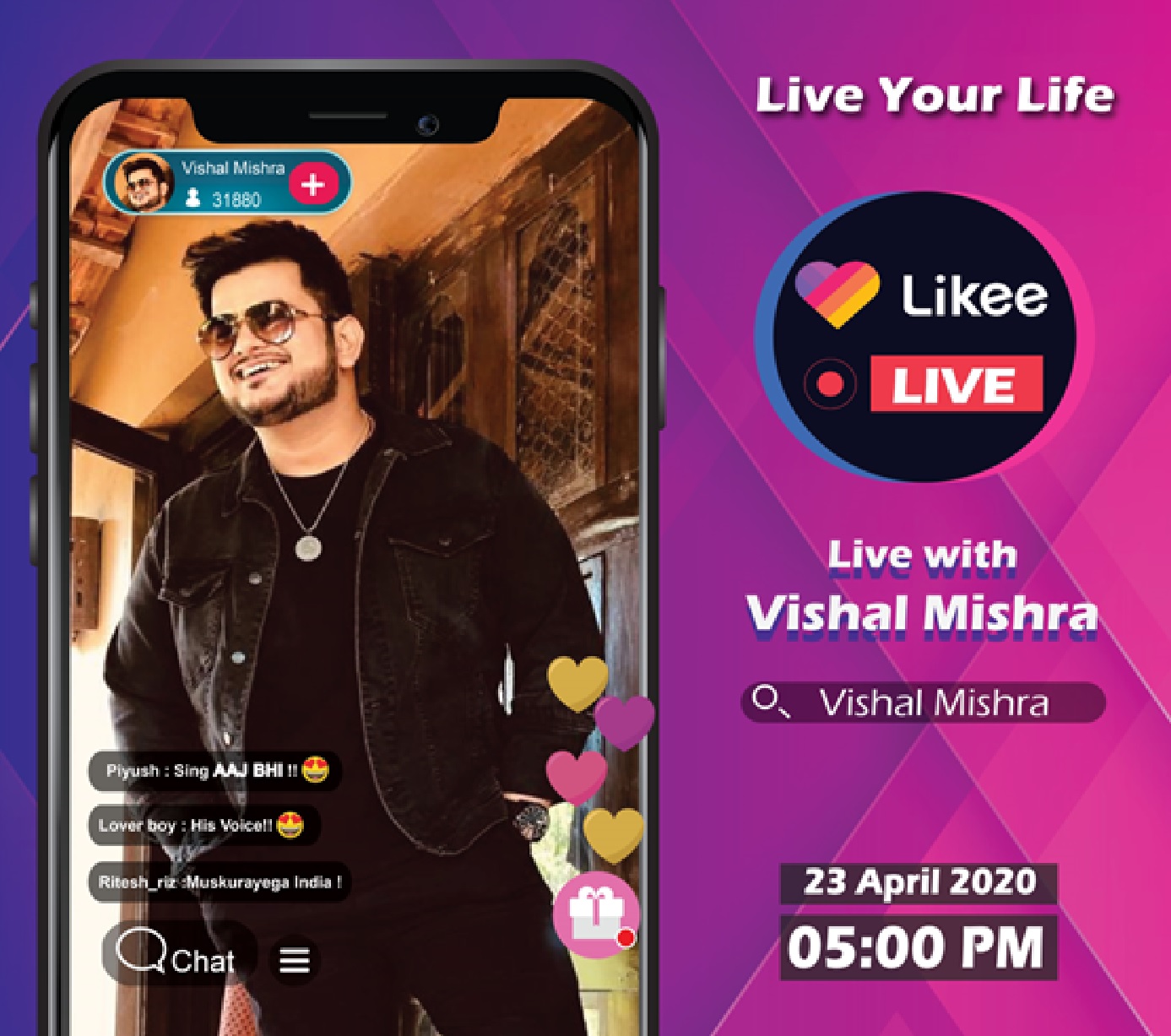 New Delhi: To re-energize his fans during lockdown, India’s famous music composer, songwriter and singer Vishal Mishra turned to Likee,one of the world’s most popular short video creation app by Singapore-based BIGO Technology Pte Ltd, recently. Vishal reached out to his fans through the Live streaming feature of the app and charmed them by crooning his latest songs, AajBhi and Muskurayega India, in his mesmerising voice.Likee’s extensive reach in India is attracting many celebrities, experts and other influencers to connect with their audience online, especially via Likee LIVE.

With more than 100 thousand likes, Vishal Mishra’s recently held 1-hour long live session was a much-needed stressbuster for Likee users. Notably, Vishal’s latest single AajBhi, which is an ode to an unfulfilled love story and features popular actors Ali Fazal and Surbhi Jyoti, was recently promoted on Likee as part of a collaboration with VYRL Originals. #AajBhi clocked more than 380 million views on the app. In another remarkable development, Vishal performed the song live for the world’s biggest virtual music concert during lockdown – ‘One World: Together At Home’. Kicked off by Lady Gaga on April 18, 2020, ‘One World’ is an on-going music concert by Global Citizen in support of WHO.

The other song performed by Vishal Mishra during the Likeelive session was Muskurayega India, which is a message of positivity in the times of lockdown by the film fraternity. Produced by Jjust Music, the song was recently promoted on the app through #MuskurayegaIndia and garnered over 379 million views.The music video of the song, featuring some of the biggest names from the Bollywood, also received appreciation from Prime Minister Narendra Modi, who shared the same on microblogging site Twitter.Jjust Music owner Jackky Bhagnani had also held a live interaction with Likers to talk about the song. The song raised money for the PM cares fund and the Maharashtra CM relief fund.

Available in different Indian languages such as Hindi, Tamil, Marathi, Telugu, Gujarati, Bengali, Kannada, Malayalam and Punjabi,Likee app provides the most extensive and innovative tools to users to create dynamic and engaging videos. Recently, Likee has also won the Guinness World Record for creating the ‘Largest online video album of people waving a flag in India’ during its ‘No matter where I am, #IAMINDIAN’ campaign. The campaign saw more than 1 lac Indians participating in celebrating India’s 73rd Independence Day.