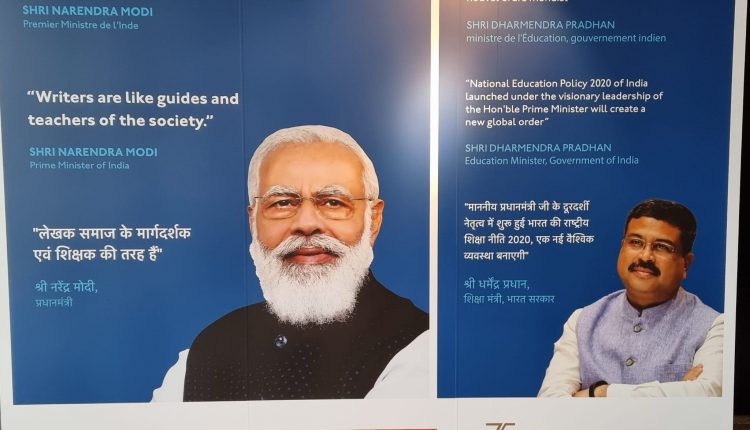 New Delhi: India is designated as the Guest of Honour Country at the Paris Book Festival 2022 being organized from 21st to 24th April, 2022 as announced under the Prime Minister Shri Narendra Modi – President Emmanuel Macron Joint Statement released in 2018 during the French President’s visit to New Delhi.

The India Pavilion which has been designed by National Institute of Design (NID), houses more than 15 digital and physical exhibitions displaying over 400 books published in various Indian languages representing the works of 65 Indian publishers.

Among the highlights of Indian presentation are launch and sale/exhibition of 10 illustrated children’s books in French translation published by National Book Trust, India (NBT). Out of these books, one includes a story by Rabindranath Tagore, and another a book on Mahatma Gandhi for kids. A special edition book on Chandernagore situated in West Bengal in India highlighting French legacy in India would also be launched.

Bringing its multi-lingual linguistic traditions and projecting its India@75 national project through events and exhibitions, the event will witness participation of more than 35 speakers—20+ arriving from India and the rest, including Indian and French writers, joining from France in over 25 literary sessions at the India Pavilion. A plethora of literary sessions, rich and diverse, taking up interesting issues like ‘Indian influences on the Art and Architecture of Europe’, ‘Women Writers and Their Creative Sphere’, ‘Mahatma Gandhi and Romain Rolland: A 21st Century Perspective’, ‘Science and Ayurveda’, ‘Many Languages, One Literature’, ‘Climate Change Concerns in Contemporary Writings’ etc will be organised. Some of the eminent personalities invited are Ms Sudha Murthy, Shri Vikram Sampath, Acharya Balkrishna, Shri Rakesh Kumar Vyas, Ms Valeries Goudart, Shri Suddhasattwa Basu, among others.