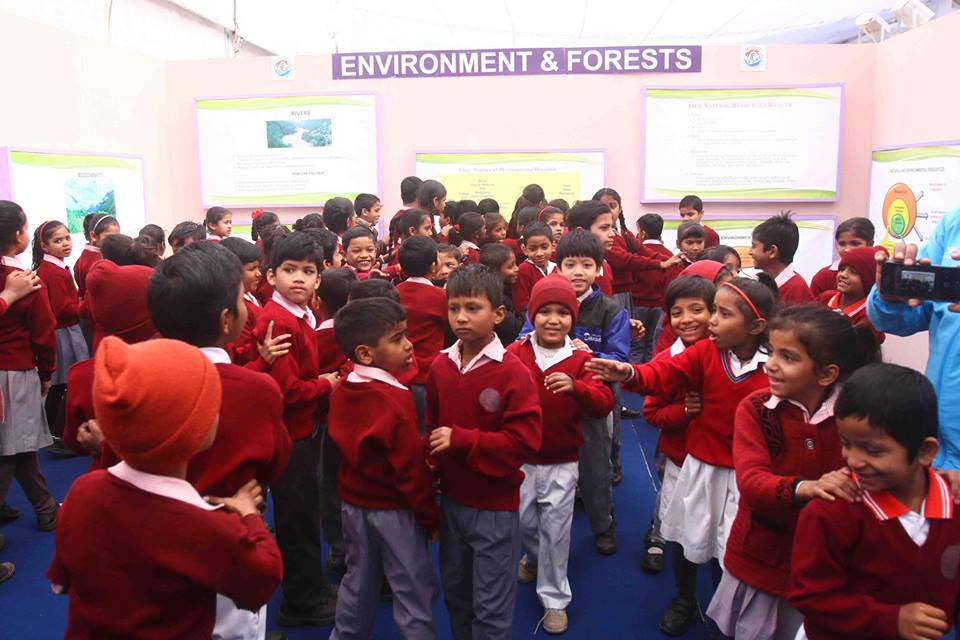 New Delhi: Union Minister for Science & Technology; Environment, Forest & Climate Change Dr. Harsh Vardhan today said, India’s progress in the field of science and technology is exponential and science can address most of the problems the society is facing now.

Dr Harsh Vardhan was talking to hundreds of school children, who turned up at his residence to see a limited exhibition, showcasing advancements in Science & Technology in India. He had already interacted with thousands of school children to generate scientific temperament among them. The exhibitions include the country’s advancement in aerospace, biotechnology, nanotechnology, green energy, plant genetics, technology to aid healthcare, etc.

The Minister has also been advocating the children to be ambassadors of environmental protection. He told them, the hazard of climate change and global warming is manifesting into a reality and people should take conscious efforts in mitigating stress on environment and climate. As developmental efforts need to be sustained, its impact on climate should be mitigated through a series of efforts, including environment-friendly lifestyle.

Ministry of Environment, Forest & Climate Change has drawn up a national campaign weaving around some 500 simple lifestyle habits that can be easily adopted, in an effort to sensitise the hazards of climate and global warming. The campaign named “Green Good Deeds” can have a cascading effect, if everyone adopts even one deed a day.

During the last one month, the Ministry has invited thousands of children from various schools to enlist their support to the campaign. Besides government officials, teachers, professionals, members of voluntary organisations and general public from across Delhi have also come forward to support the cause.

“Every citizen should become a ‘Green Volunteer’ so that we could relay the environment we inherited from our ancestors to the generation that is yet to take birth. That’s our moral responsibility,” said Dr. Vardhan.

He said the present government is undertaking several good deeds including “Green Good Deeds”. He pointed there has been intervention from the highest political level to bring down the level of air pollution in Delhi and its surrounding areas, which has become an international subject of discussion. All states involved in stubble burning have been told that they need to take firm measures to curb it by the next season. In fact, even budgetary allocations were made to support the efforts of Haryana, Punjab, Uttar Pradesh and the NCT of Delhi to address air pollution. The government have also decided to subsidise machinery required for in-situ management of crop residue to prevent burning of stubble in the next winter. The minister said, he would like all, particularly youth and children to understand that our deeds have to be environment-friendly. Dr Vardhan said, the hazard of climate change and global warming is manifesting into a reality and people should take conscious efforts in mitigating further stress on climate.

There should be a judicious balance of sustainable economic development and environmental protection. While the role of the government is to prepare roadmap for environmental protection, adherence to the rules and regulations is the primary responsibility of the stakeholders. Unless there is public involvement and commitment, no such drive can be taken to its logical conclusion. Like Corporate Social Responsibility, it is the Green Social Responsibility of every citizen to maintain environment.

India poised for a leap in Electric Mobility; Nitin Gadkari