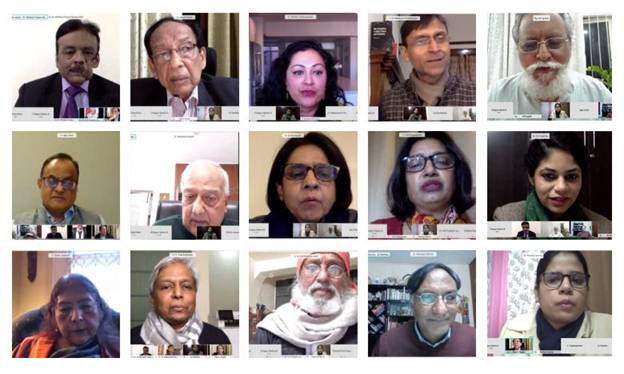 New Delhi: A post-draft consultation process that saw the participation of some of the top experts and thought leaders from a range of disciplines brought in enriching ideas to strengthen the draft of the 5th National Science Technology and Innovation Policy.

“There has been a digital revolution with immense changes in technology in last few years. While accounting for this change, we need to have rootedness in the culture. One step in that direction is strengthening of language labs. Besides, practical implementation is important for STI for large scale learning. This policy document aims at taking everything into consideration to shape the future of the country,” said Professor K VijayRaghavan, Principal Scientific Adviser to the Government of India, at the consultation organized through webinar on January 23, 2021. He stressed the need to incorporate the Policy Process Framework Document and the implementation strategy in the final document.

Secretary, DST Prof Ashutosh Sharma, said “To be ready for the future, states need to connect with the centre and use science, technology, and innovation to solve their problems. At the same time, international connect, and science diplomacy needs equal attention”. He added that in India, “we focus on generated knowledge, but we need to consume them properly to bring innovation- connecting innovation to knowledge”

“There have been 300 rounds of consultations. For the first time, we have consulted States, line ministries, and Indian diaspora. These kinds of consultations would make the document more inclusive,” said Dr. Akhilesh Gupta, Advisor, DST, and Head STIP Secretariat.

Former Member of National Disaster Management Authority, Secretary of Department of Ocean Development and world’s renowned seismologist Dr. Harsh Gupta stressed on the need for a roadmap and implementation mechanism coupled with timeline for manpower and financial plan for increasing investment in science and technology.

Prof Sheila Jasanoff, Science and Technology Studies expert at Harvard Kennedy School in USA, said that the role of social sciences, humanities as well as ethics is equally important in any country, and the policy should reflect it.

Former Secretary General of Rajya Sabha and Chief Secretary of UP, Shri Yogendra Narain, highlighted the need for training of supervisors who would supervise research and also about the necessity of strengthening of institutional collaboration.

Honorary Professor at the Indian Institute of Science Professor Ajay Sood emphasized the necessity to consider the role of academies in the country and the academies, especially in science diplomacy, involving them in more engaging ways so that they become active and contribute in more meaningfully.

Former Professor of Indian Institute of Management, Ahmedabad and world’s renowned expert in grassroot innovations, Professor Anil Gupta underlined the importance of bringing art closer to science and emphasized the role of culture in institutions. He also stressed on acknowledging every knowledge provider and on reaching out to the masses through existing networks like Krishi Vigyan Kendras, Indian Railways and post offices on a daily basis.

Noted environmentalist and Director General of Centre for Science and Environment Dr. Sunita Narain underscored the need to move to societal science and said that science needs to be more engaging. “Engagement of Indian science with people need to increase like it has happened in case of flood forecasting and cyclone forecasting,” she added.

Makarand R Paranjape, Director, Indian Institute of Advanced Studies, spoke about including the integration of disciplines in the policy and the need for fostering a culture of excellence throughout the country.”

Shobita Parthasarathy, Professor of Public Policy, Director, Science, Technology, and Public Policy program; at the University of Michigan, advocated for balance between society, environment, and economy. “Grassroots innovation and traditional knowledge is the strength of India and often offer solutions to problems. Women play key role in majority of grassroot innovations, and their role should be acknowledged,” she pointed out.

Dr. Anil Prakash Joshi, founder of Himalayan Environmental Studies and Conservation Organization (HESCO), said that in a country like India, where the larger population lives in rural areas, and a policy must reflect their needs and aspirations. “There is a need for scientific validity of traditional knowledge,” he added.

Dr. Rajeshwari Rajagopalan, Distinguished Fellow and Head of the Nuclear and Space Policy Initiative at the Observer Research Foundation (ORF), pointed out that there should be provision for periodic audit of investment and benefits, and the policy should focus on reversal of brain drain and how to retain best brains and bring back the best minds to the country.

The draft STIP was put together by STIP Secretariat led by Dr. Akhilesh Gupta with guidance from the Office of Principal Scientific Adviser (PSA) to the Government of India (GoI) and the Department of Science & Technology (DST), GoI. The draft STIP was released for public consultation on 31st December 2020. Since then, a number of post-draft consultations have already been initiated to invite suggestions and recommendations. A series of consultations have been planned during next 2 weeks. The last date for receiving the comments has been extended to 31st January,2021.