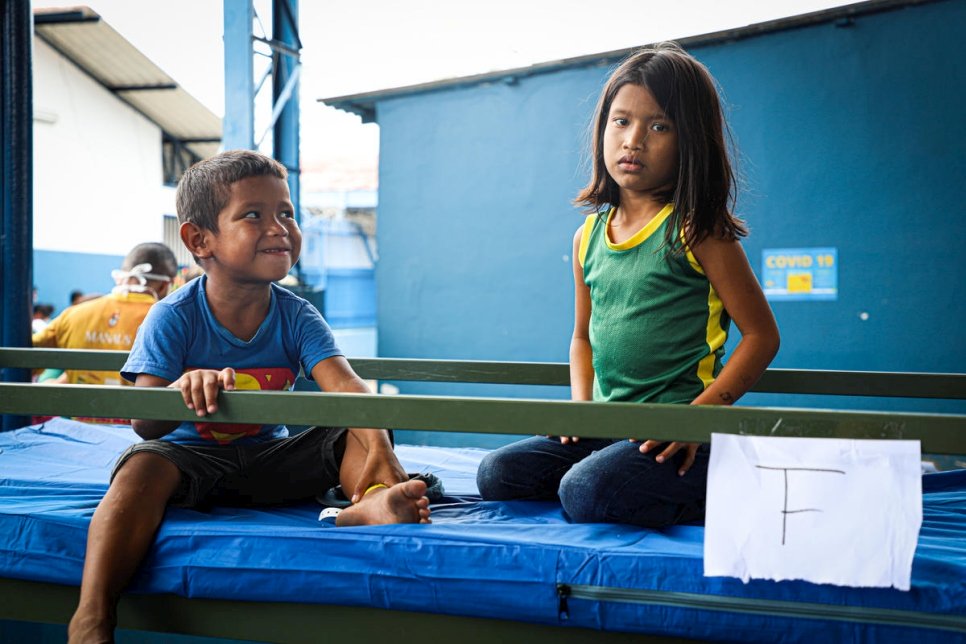 As the Coronavirus pandemic spreads through Latin America, UNHCR, the UN Refugee Agency, is warning that many displaced indigenous communities are now dangerously exposed and at risk.

There are almost 5,000 indigenous Venezuelans displaced in Brazil, mainly from the Warao ethnic group, but also from the Eñapa, Kariña, Pemon and Ye’kwana communities. With COVID-19 hitting this Amazon region hard and Brazil emerging as an epicenter of the pandemic, UNHCR is worried that many may struggle without adequate health and sanitation conditions.

In Colombia, a number of bi-national indigenous groups, including the Wayuu, Bari, Yukpa, Inga, Sikwani, Amorúa, live near the border with Venezuela. While their ancestral homes straddle both countries, many have not been able to regularize their stay in Colombia and are undocumented. Some now also face threats from irregular armed groups who control the areas where they live.

UNHCR is concerned that for some indigenous Venezuelans, documentation issues, most notably their irregular status, and living conditions are placing them at heightened risk.

Many live in isolated or remote areas, where they lack access to health services, clean water and soap. Others live in cramped dwellings or in informal urban settlements without access to protective equipment. Most of the border indigenous groups are threatened by physical and cultural extinction because of insufficient food and severe malnutrition that can increase the risk of contagion. These areas have lacked adequate health services which can now exacerbate the current situation.

National lockdowns have also ground to a halt many of their livelihood activities, such as farming, the selling of produce and handicraft production. Faced with increasing poverty and destitution, some have no option but to peddle goods on the streets to try and support their families. Not only does that expose them to the risk of infection but also stigmatization and discrimination for perceived inability to comply with lockdown and physical distancing measures.

Other protection concerns include an increased risk of recruitment of children in certain areas in Colombia, where armed conflict has not ceased. Education is also a challenge as isolated and impoverished indigenous students and teachers have no means of learning remotely and pursuing virtual education during the lockdown.

Since March, UNHCR has been working with national governments to ensure COVID-19 prevention measures and assistance reaches remote areas where these groups have found safety. This is in addition to the work with displaced indigenous communities in both Brazil and Colombia on prevention and awareness.

As the number of suspected and confirmed cases increases and the first deaths are reported among indigenous communities, UNHCR has scaled-up its support despite a serious lack of funds.

To try to limit the spread and impact of the virus, UNHCR is working with national authorities to increase capacities of national health systems. New structures including improved shelters, care and isolation facilities as well as early warning systems have also been put in place to respond to COVID-19 among indigenous, displaced Venezuelans and their hosts.

In Brazil, UNHCR is supporting national efforts to ensure adequate shelter for indigenous Warao refugees from Venezuela. Currently, some 1,000 indigenous people benefit from shelter, food, medical and educational services provided by Operação Acolhida, the national government led emergency response to the Venezuelan influx in Brazil. Additionally, some 770 Warao have been relocated to municipal shelters with better hygiene conditions in the cities of Manaus and Belem in response to the coronavirus outbreak. UNHCR is facilitating the relocation providing technical support and material assistance, including mosquito nets, hygiene kits, solar lamps as well as transportation. UNHCR is also continuing hygiene promotion sessions, delivered in Warao and Eñepá languages, to indigenous refugees in those cities.

In Colombia, complementing national efforts, UNHCR and partners are supporting the State in food distributions and providing hygiene kits for those most vulnerable among the Yukpa and Wayuu populations, especially those living in informal settlements. Health brigades have been organized and remote protection lines have also been activated by UNHCR and partners. Information and hygiene promotion campaigns tailored for indigenous communities, also continue.

Despite strong efforts made by host countries and humanitarian organizations, increased support is urgently needed to continue life-saving interventions for indigenous communities, other refugees and local host communities.

Ahead of an international donor conference for Venezuelan refugees and migrants in Latin America, hosted by the EU and Spain, next Tuesday, UNHCR is calling on countries to pledge support. Alarmingly, the Regional Response Plan for refugees and migrants from Venezuela (RMRP) is currently just four per cent funded.

UK: Sir Jonathan Thompson appointed to the HS2 Ltd Board

India Education Diary Bureau Admin Apr 22, 2021
Jammu: Intensifying its efforts against the spread of Covid-19 virus government today stated that it is…