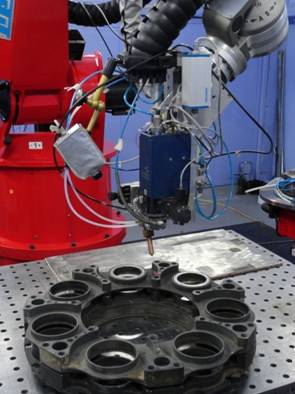 Ni-based superalloys are widely used in aero-engine components. Despite having exceptional properties, they are prone to damage due to extreme operational conditions. Manufacturing defects during the casting or machining process are another major cause of rejection, and tons of such unused components are scrapped due to minor defects.

A team of scientists from the International Advanced Research Centre for Powder Metallurgy & New Materials (ARCI), an autonomous R&D Centre of Department of Science & Technology, Govt. of India, indigenously developed powders suitable for additive manufacturing using inert gas atomizer available at ARCI by melting unused scrap material. Utilising this, ARCI is developing the Laser-DED process for the repair of aero-engine components made of Ni-based superalloy.

Furthermore, the ARCI team developed a technology to refurbish pinion housing assembly (critical component in helicopters used for power transmission to the main fan) by machining out the damaged layer and rebuilding it using laser cladding process followed by final machining. Laser cladding and Laser-DED (both processes) are the same. In general, for two-dimensional deposition (surface coating), the term laser cladding is used, and for the manufacture of three-dimensional parts, the term laser-DED is used. A patent (201911007994) has been filed for the same.

A post-clad heat treatment method was also designed to minimize microstructural inhomogeneity and ensure minimal substrate properties variation. These laser-clad repaired prototypes were found to be free from distortion and exhibited excellent performance. The team has also developed repair and refurbishment technologies for other industrial sectors, such as refurbishing diesel engine cylinder heads made of grey cast iron and refurbishing shafts used in the refinery. This work has been published in the journal ‘Transactions of The Indian Institute of Metals’.

Thus the impact of repair and refurbishment technology developed by ARCI  can be best realized in the aerospace sector due to expensive materials, manufacturing costs, and stringent quality checks.

Renowned poets will present their poetry and couplets on the “celebrations of India’s independence” while remembering the sacrifices made by the great freedom fighters: Mukhtar Abbas Naqvi