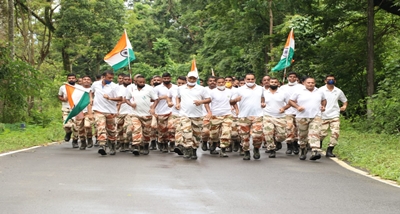 New Delhi: The Indo-Tibetan Border Police, ITBP has launched a fit India freedom run at all its border posts and formations in the country. The campaign is aimed at generating awareness among the masses for fit India.

During this campaign its troops and officers will undertake a 10 kilometer walk. The campaign started yesterday, the 15th August, under the aegis of the Ministry of Sports. It will culminate on 2nd October this year, on Gandhi Jayanti.

The ITBP has planned to undertake this mission at all locations throughout the months of August and September to organise the run in association with the civil population of the concerned areas. Many rallies and other public functions will also be organised during the campaign following the social distancing norms.