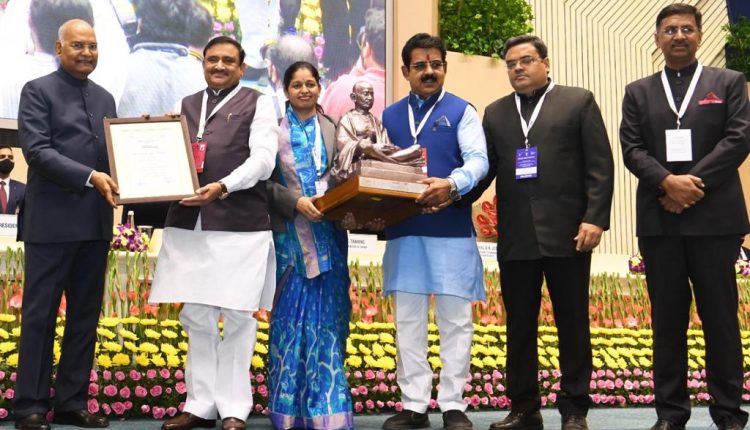 New Delhi: In the cleanliness survey, Indore has once again won the title of cleanest city in the country for the fifth time in a row. Indore was honored with the award in cleanliness survey from the lotus feet of Hon’ble President Ram Nath Kovind at Vigyan Bhawan, New Delhi on Saturday morning. The award was received by Madhya Pradesh Urban Development Minister Bhupendra Singh along with Indore Administrator Dr. Pawan Kumar Sharma and his team. Along with the cleanliness survey, Indore was also awarded the Safai Mitra Suraksha Samman. Indore has been given this honor for providing better equipment and technology to the sanitation workers. This is the first time in the Swachh Bharat Survey Awards that the same city has been awarded in two different categories. It is worth mentioning that the Central Government started the Safai Mitra Suraksha Puraskar from this year itself and for the first time, Indore was successful in bringing this award to its account.
Talking to reporters after receiving the award, Dr. Pawan Kumar Sharma, Administrator of Indore Municipal Corporation and Commissioner of Indore, said, “It is a matter of great pleasure for Madhya Pradesh and Indore to receive national level awards in two different categories. This award is the result of the efforts of the public representatives and officials of Indore as well as the entire people of Indore. With everyone’s cooperation, the campaign to keep the city clean and clean was successful. He further said, ‘Earlier years, the message of keeping the city clean was given through government institutions, campaigns were run at mohalla level at regular intervals, the result of which is that today every resident of Indore has become so aware that he himself Takes care of cleanliness and inspires others for cleanliness also.
According to Dr. Pawan Kumar Sharma, getting two honors at once increased the responsibility of the residents of Indore city and the government staff, in the sense that the way Indore has been making the cleanest city of the country for five consecutive years, it will be the first in future also. Remain in place. For this you will have to work harder. He also said that Indore has brought sewerage and ground cleaning to Indore in excellent condition, now efforts will also be made to improve its AQI i.e. Air Quality Index here.
Let us inform that for the first time in 2016-17, Indore became the number one city of the country in terms of cleanliness, after which it won the award in 2017-18, 2018-19, 2019-20. Now in 2020-21, Indore has put ‘Punch of cleanliness’, occupying the first place in the cleanliness survey of the population category of more than one million. After Indore, like last year, Surat remained the city of Gujarat this year as well, while Vijayawada of Andhra Pradesh was declared the third cleanest city in the country. As far as Indore is concerned, the cleaning system of the Municipal Corporation is so fast that the dirt in the city is no longer visible. There is no open drain flowing anywhere in the city. At the same time, the sewerage water of the city’s plants and parks is treated and used for irrigation. Separate dustbins for wet and dry waste have been installed at different places to avoid littering on the roads. To enhance the beauty of the city, attractive pictures and paintings have also been made on the walls at different places.

New OPDs and updated facilities at Dept of Medicine