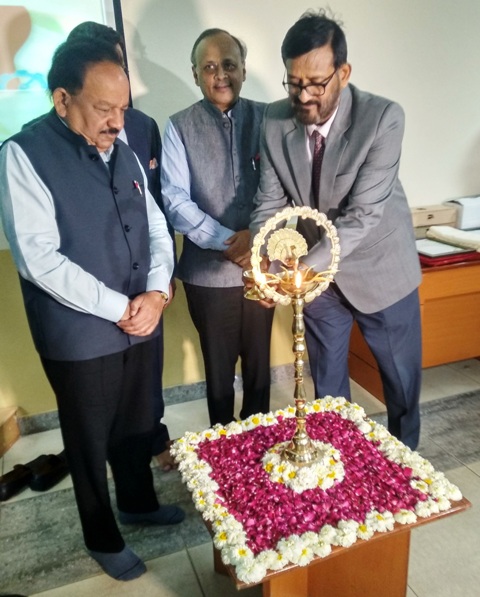 Dr. Harsh Vardhan, the incumbent minister at Ministry of Science & Technology (India), Ministry of Environment, Forest and Climate Change and Ministry of Earth Sciences in the BJP-led NDA government as Chief Guest, also representing Chandni Chowk in Delhi as a Member of Parliament was the Chief Guest of the occasion.
Guest of Honour of the event, Dr. Jitendra K. Das, Director, Fore School of Management, New Delhi and Prof. Ashly H. Pinnington, Dean of Research, The British University in Dubai also graced the occasion.
Sharing his experience from past 25 years of social work, Dr Harsh Vardhan stated how Management Education plays a great role not just in the development of one’s personal life but contributes to the society and institutions towards maximizing gains by making good utilization of available human resources, skills, knowledge, talent, and expertise. He cited how it was due to an exemplary management of the public-private partnership, the pulse polio drive became a successful nationwide campaign in the 1990s, which went on to eradicate polio. He also shared some of the achievements in the field of science and technology towards keeping the environment clean and action is taken to fight greenhouse gas emissions in.
Mementos were given by Sharad Jaipuria, Chairman and Shreevats Jaipuria, Vice Chairman, Jaipuria Institute of Management respectively, to Chief Guests and Guests of Honour.
Prof. Jitendra K. Das, Director at FORE School of Management, Delhi, a Ph.D. from University of Toronto and founder Dean (Noida Campus) of IIM Lucknow, has to his credit many national and international publications. He is a recipient of “Asia’s 100 Greatest Brands & Leaders 2016 Award” and has been also honoured with “One of Asia’s 50 Greatest Leaders 2016” while being awarded the ‘Certificate of Excellence’ and ‘Educationist of the Year in Asia Award in 2018’.
Dr. Das shared, about sustainability, carbon footprints and Ecosystem stating how eco-systems work while remaining interconnected and dependent on other Ecosystems. Any by-product of one Ecosystem in nature is used by another ecosystem. Anything which is a waste for one ecosystem is a reasonably good input for another ecosystem. When another ecosystem is not able to use the waste, then that becomes a problem. “If it is not possible for a business entity to entirely eliminate carbon emission, they should start buying out carbon credits” he said. Credit certificates, can generally be traded on exchanges, thus allowing the organisation to emit a specified amount of carbon that is compensated by carbon-reduction efforts elsewhere. The credits can be sold by places with lower emissions.
Prof. Ashly H. Pinnington: Dean of Research, Head of Ph.D. in Business Management Programme whose research work has been on talent management, corporate social responsibility, and leadership development. He has co-edited books on HRM: Ethics & Employment published in January 2007 by Oxford University Press, and International Human Resource Management, published in January 2015 by Sage. Prof. Pinnington shared on collective compliance with soft revaluation, the creative path to consensus and how we can work on Disruptive Paradigm Shift and Sustainability Revolution and futurism.