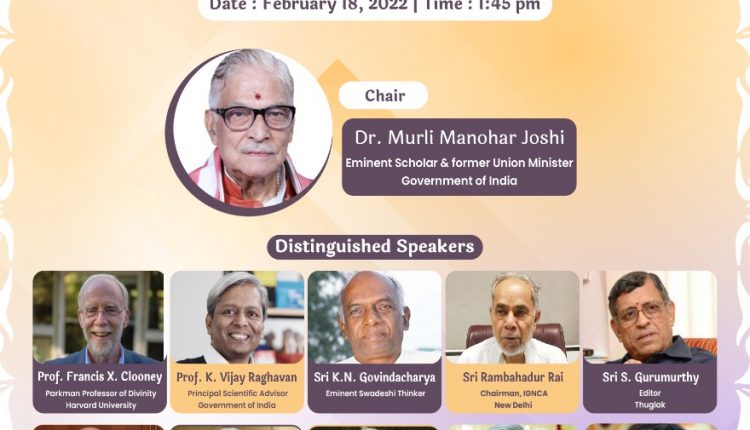 Dr. Joshi stressed the need to focus on originality in the Indian education system. He urged the teachers to communicate in simple language, while teaching the students so that they understand the subject and topic properly. “Every year teachers should try something new to incorporate creativity into their lectures. Only then they will be able to transform ‘India’ into ‘Innovative India’. Dharampal ji enlightened youth through his articles and literature and today it is time for India to understand itself. When India understands itself, the world will also understand India,” he said, adding that all archival evidence about ancient India should be gathered from British Archives in a systematic manner.

Professor of Divinity at Harvard University Francis X. Clooney said through his books Dharampal ji tried to explain that when the system and the process of development are compatible with the Indian psyche and vision, only then there would be public participation in it. The writings and life of Dharampal ji are important mediums to understand Sanatan Dharma and traditions. “Dharampal ji used to see things in totality. Because of this, he had a fundamental understanding of India and the West, the evidence of which is found in his book ‘Bharatiya, Chitta, Manas and Kala’.

Panchayati Raj is the cornerstone of Indian life: Rambahadur Rai

President of Indira Gandhi National Centre for the Arts Shri Rambahadur Rai described Panchayati Raj as the cornerstone of Indian life. “Dharampal ji wrote a book with this title. It tells people that the entire governance system should be built on the foundation of Gram Swaraj, imagining the Sanatan traditions of India. The building of India’s reconstruction should also stand on this foundation,” he added.

Prof. K. Vijay Raghavan, Principal Scientific Adviser to Government of India, said we need to train a new generation of teachers and students, who can identify and solve problems with modern techniques. He said our aim is to take Science to the highest global level and impact the society with it.

Member of New Education Policy Drafting Committee Prof. M.K. Sridhar said in his book ‘The Beautiful Tree’ Dharampal ji has elaborated that the ancient education system that was prevalent in India before the arrival of the British was very prosperous. The subjects which have been included in the National Education Policy are also mentioned in this book. He said provisions like the spread of folklore and equality in the field of education were present in India even in the past. Dharampal Ji has mentioned them with evidence in his book, he added.

Re-evaluation of the past: Shri Gurumurthy

Editor of ‘Thuglak’ Shri S. Gurumurthy said it is necessary that the social contribution of Dharampal ki be assessed in today’s circumstances. He always challenged colonisation and the focus should be on re-evaluating the past and his lasting contribution to Indian education.

Walked on the path of Gandhi throughout his life: Prof. Geeta Dharampal

Noted historian and daughter of Dharampal ji, Prof. Geeta Dharampal, said following the path shown by Mahatma Gandhi, Dharampal ji took necessary steps to remove any obstacle that may arise between the country’s identity and security after India’s Independence.

Prof. Ashok Jhunjhunwala of IIT Chennai said that for building a new India it is necessary that we read the books by Dharampal Ji. Today, the need is innovation, but the focus is on ‘copy paste’, something that needs to be avoided.

Well-known Yogacharya Shri T. M. Mukundan said the unbreakable relation of truth and non-violence gives rise to the idea of ‘satyagraha’. The entire life of Dharampal Ji is inspired by this thought. He also elaborated on Dharampal Ji’s views regarding civil disobedience and Satyagraha.

Shri Pawan Gupta, founder director of Society for Integrated Development of Himalayas, Mussoorie, said Dharampal Ji was trying to understand the Indian public throughout his journey.

Former Professor of Vivekananda College, Chennai, Prof. K.V. Varadarajan said whoever was born after Mahatma Gandhi’s practice of Swaraj in India must have made a direct or indirect connection with Gandhi. Dharampal Ji was one of them. He tried to understand the common man and the folk culture throughout his life.

Director of Centre for Policy Studies Dr. J.K. Bajaj said there is a need to organise more such activities to bring to light the service of the society done by Dharampal Ji and the values established by him.

DG IIMC Prof. Sanjay Dwivedi said Dharampal ji proved through documents and his research that India was a global leader before Britishers encroached on our culture. He said the biggest aspect of Dharampal Ji’s thought is that he looked at India through the eyes of an Indian and not an Englishman.

Chairman of Centre for Policy Studies Prof. M.D. Srinivas stressed the need to spread the thoughts of Dharampal ji to the new generation through modern means of communication, as his thoughts define the Indian education system from a new and positive perspective.

The seminar was moderated by Prof. (Dr.) Sangeeta Pranvendra, Head of Community Radio, IT and Social Media in IIMC. Prof. (Dr.) Pramod Kumar, Head of Outreach Department proposed a vote of thanks.