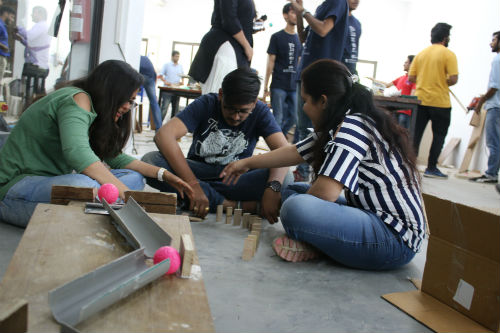 Ahmedabad: Innovative, project-based learning gained thrust at Ingenium 2018 today. The third technology festival organized by the School of Engineering and Applied Science, Ahmedabad University, saw impassioned rivalries as 1300 students from 51 colleges across states gained centrestage. They were engaged in competitive tasks to test their mettle through the day.

Code Villa, a software enhancement contest, saw 35 students adding, modifying and putting in best efforts to enhance a pre-coded software in Java. Nine teams of three members each worked in tandem to deviate from regular thinking to create for a cause, out of a random given ingredient at the Junkyard Wars. Participants next, highlighted the importance of viable alternatives to fossil fuel by designing a car propelled by hydrogen fuel cell. The challenge was to make it cover the maximum distance using a limited amount of water to touch the success mark.

A high-octane Mini Militia, a multi- player, army shooting game engaged 6 players through online gaming and 12 players via local hotspot in gripping rounds of play. The excitement was kept alive at Codefi, a coding duel for teams of three. The knowledge of algorithm was put to test, as points were awarded on the basis of the time complexity and memory utilization. Ingenium 2018 offered a chance to show off designing skills in CAD software and claim a prize. A round of Techno-Industrial Quiz was a trial by fire adjudging in-depth subject knowledge while Web Spin e-treasure hunt taught unique methods of goal achievement.

Ecstatic students tackled, dribbled and passed at FIFA showing tactics and strategies to counter opponents with football as the medium. Construct-O-Mania was an ingenious ode to those who crave to put their names on the bridges that connect, wrapping up excitement for day in a competition judging theoretical and practical strengths by making a bridge and connecting platforms to do so.