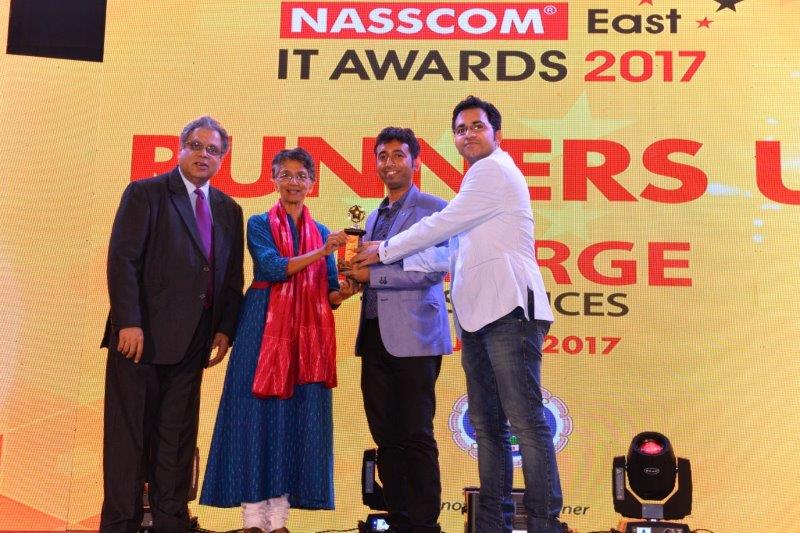 Kolkata: Innofied Solution Pvt Ltd, a leading web and mobile app development company in Eastern India,
has been awarded the prestigious Nasscom East IT Awards 2017 in the Emerge Category,
which is one of the top category at Nasscom East IT Awards, 2017.
Nasscom East IT Awards 2017 had three broad categories Growth, Emerge and Enterprise.
Tata Consultancy Services, mJunction, Met Technologies and number of other promising and
popular IT organizations has been awarded. The parameter which the panel of judges have
considered to choose the winners are contribution towards IT, business operations and the
company’s future prospects.
Held on 6th July, 2017 at J W Marriott, Kolkata, it was a great day and big honour for Innofied to
accept this award in person. Swarnendu De and Sandip Saha, Innofied’s CEO and CoFounders
received the award from Mr. Raman Roy, Chairman NASSCOM and Ms. Rekha
Menon, M.D. Accenture.
Mr. Swarnendu De, CEO and Co-Founder of Innofied Solution said, “ It was a great honour that
not only brought us fame, but helped achieved another milestone that Innofied has been trying
for long.” He further adds, “ This award is not ours, rather it belong to the whole team who
makes up Innofied. And also belong to the clients who have trusted and had faith on our
services and quality. We want more such feathers to add in our hat. A long journey is yet to
travel.”
The Chief Guest of the event was Ms. Mamata Banerjee, Honourable Chief Minister of West
Bengal, Mr. Amit Mitra (Finance Minister of West Bengal) and Mr. Bratya Basu (IT Minister of
West Bengal). It was the honourable CM who spoke about the future growth of SEZ in West
Bengal and number of possibilities for the IT industry. She promised that the IT industry would
find it on ease while doing business with the State.