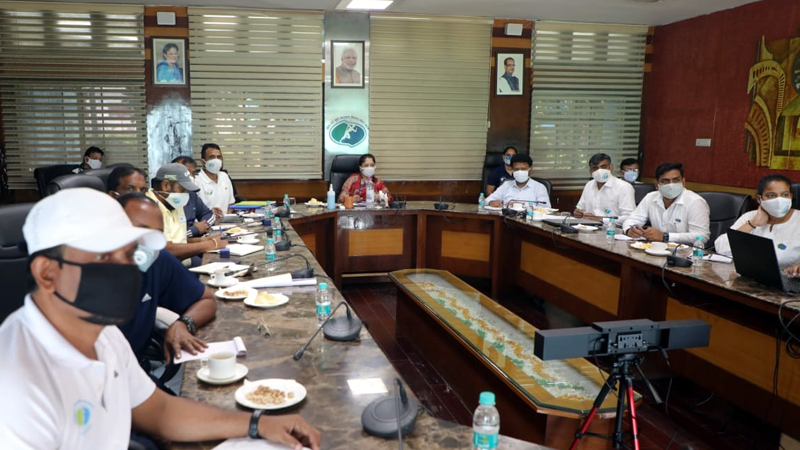 Innovation begins from Out of the Box Thinking: Smt. Scindia

Bhopal : The people’s life has become unusual and different because of the Covid pandemic in the entire world. The Minister for Sports Smt. Yashodhara Raje Scindia is striving hard to convert the challenge into an opportunity and to implement various innovations in the field of sports. In this sequence, Smt. Scindia deliberated with Vice President of American Olympic and Para Olympic Association Shri Kelly Skinner for almost 2 hours, during the Live Online Session of ‘Sports High Performances Leadership’ programme. Smt. Scindia said that sports activities were shut around the world due to Covid-19 infection. After the unlocking in the state, the process of training of players has been started in a phased manner. Now players and coaches will be able to perform better with the help of the Sports High Performance Leadership Programme. She said that innovation will only begin with the ‘Out of the Box Thinking’.

Shri Kelly Skinner informed that innovations are utmost important in sports. While citing an example of Winston Churchill’s famous words ‘Now that we have run out of money, we have to think’, Shri Skinner said that when you have less money, then you have to get out of the box meaning one should take help of Creative Ideas, Creative Thoughts and New Thinking. He described the process of innovation as three tier process that includes Idea Generation, Problem Solving and Implementation.

With the examples of skating, throw, running, Shri Kelly described how high performance can be achieved in Olympic, utilizing innovations in sports. In the session, he informed about the innovation conducted in America in talent identification and talent transfer. He said that a talent scouting camp that prepared an advertisement for NOH (The Next Olympic hopeful) was so inspiring that more than nine thousand players got screened at this talent scouting camp. Similarly, he asked various sports associations of America to identify their players, who were not as successful in their games in comparison to their talent. Such players were made Olympic champions by changing games through scientific screening. Giving an example of gymnastics and pole vault, he described how gymnastics training helps in pole vault. He discussed out of box thinking, Talent Identification, Talent Transfer in detail through various examples. During the discussion, Shri Kelly also answered questions. The Minister for Sports and Youth Welfare, Smt. Yashodhara Raje Scindia expressed gratitude to Shri Kelly Skinner for giving such detailed and out-of-the-box information about sports high performance.