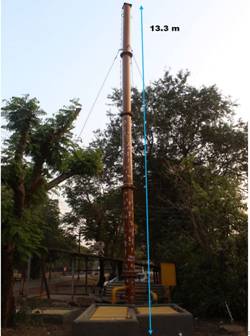 New Delhi: Two little towns with a population of around 20,000 in Palghar district of Maharashtra have become a model of how challenges like intermittent supply, water losses, deteriorating water infrastructure can be tackled at a reasonable cost.

IIT Bombay has come up with ‘Shaft with Multiple Outlets’ as an intervention for improving the performance of existing piped water distribution networks. The intervention consists of a new strategy of optimal water supply operation by use of scheduling and decentralizing infrastructure.

With support from the Department of Science and Technology (DST)-Water Technology Initiative, IIT Bombay & IIT Madras, with participation of local gram panchayat, implemented the solution in the towns of Saphale, and Umerpada, in Palghar district, Maharashtra, which is currently provided with water from a multi village water supply system.

These solutions will minimize the need for costly infrastructure components and improve the operation of the system. Typically, for population of 2000 habitations, conventionally, ESR (half-day storage capacity) will require a cost of about Rs. 10 lakhs, whereas shaft with multiple outlets will cost Rs. 2 lakhs. As per census population 2011, in India, there are about 5 lakhs such habitations with population lesser than 2000. Hence, adoption of shafts with multiple outlets will save thousands of cores expenditures in ongoing governments Jal Jeevan Mission and other urban water supply systems. Apart from cost, the multioutlet provision in shaft provides great operational ease, better pressure management, and better response to future population growth. This low-cost intervention, which has minimised the need for costly infrastructure components and improved the operation of the system, has been recommended by the Ministry of Jal Shakti for implementation in all the states as part of Har Ghar Jal under Jal Jeevan Mission. Many public health engineering departments, municipal corporations, and water authorities have come forward to adopt these solutions as these will lead to huge cost savings.

The solution supported by DST under Water Technology Initiative for Demand-Driven Convergent Water Solutions will minimize the need for costly infrastructure components and improve the operation of the system.