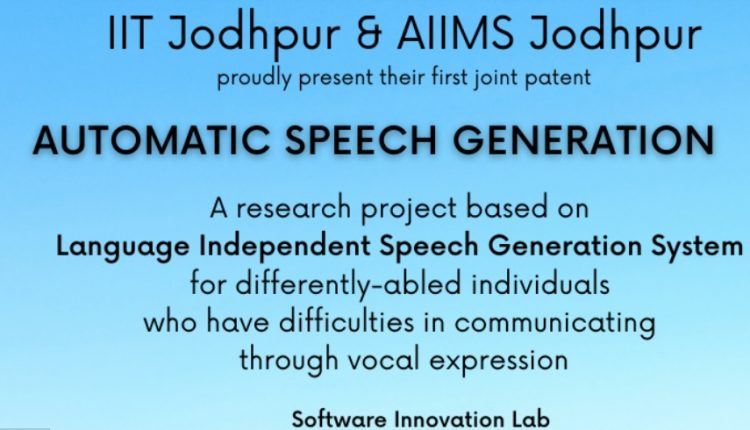 JODHPUR : In a joint initiative, Innovators from the Indian Institute of Technology (IIT) Jodhpur and All India Institute Of Medical Science (AIIMS) Jodhpur have developed low-cost ‘Talking Gloves’ for people with speech disability. The developed device costs less than Rs. 5000 which uses principles of Artificial Intelligence (AI) and Machine Learning (ML) to automatically generate speech that will be language independent and facilitate the communication between mute people and normal people. The developed device can help individuals to convert hand gestures into text or pre-recorded voices. Hence, makes a differently-abled person independent and communicates thr message effectively.

Various preordain situations result in a disease or injury to people and deprive them off with their natural ability to communicate verbally. Sign language is a mode of communication for patients who are unable to speak. In recent years, the technological advancement in the field of electro-medical devices for life support, implantable biomedical devices, and wearable medical devices have successfully provided artificial abilities to afflicted people related to any kind of disability or impairment. The patented innovation from IIT Jodhpur and AIIMS Jodhpur is a big step towards advancement in this field.

Expressing his views on the innovation, Prof. Sumit Kalra, Assistant Professor, Department of Computer Science and Engineering, IIT Jodhpur, said, “The language-independent speech generation device will bring the people back to the mainstream in today’s global era without any language barrier. Users of the device only need to learn once and they would be able to verbally communicate in any language with their knowledge. Additionally, the device can be customized to produce a voice similar to the original voice of the patients which makes it appear more natural while using the device.”

An audio signal is generated by an audio transmitter corresponding to the assigned phonetic and based on trained data associated with vocal characteristics stored in a machine learning unit. The generation of audio signals according to the phonetics having combination of vowels and consonants leads to the generation of speech and enables the mute people to audibly communicate with others. The speech synthesis technique of the present subject matter uses phonetics, and therefore the speech generation is independent of any language.

The team is further working to enhance the features such as durability, weight, responsiveness, and ease-of-use, of the developed device. The developed product will be commercialised through a startup incubated by IIT Jodhpur.