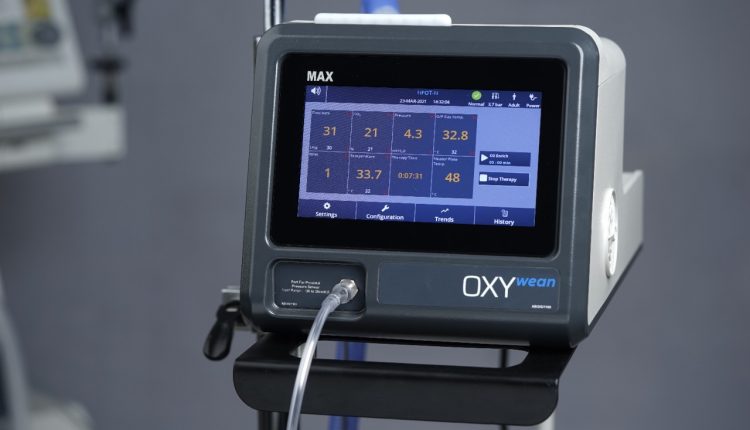 New Delhi: Even as the country battles a possible resurgence of the virus, India’s healthcare infrastructure is struggling to stand strong. A fuelled demand for COVID-19 essentials for hospitals like ventilators, oxygen plants, oxygen concentrators can be seen from across the country especially states like Kerala, Maharashtra, Punjab, Odisha etc. This is accelerating the need to innovate in lifesaving devices to make it economical and expedient for patients.

One of India’s leading ventilator manufacturer Max Ventilator has been quietly working on two such new ventilators to provide far more advanced and sophisticated devices. The company have recently launched a High Flow oxygen Therapy (HFOT) device which not only gives nearly 100 per cent chances of survival, but also entails less operating costs than a traditional ventilator. A modern state-of-the-art device, the HFOT equipment promises to add force and strength to the ongoing battle against a resurgent Covid-19 virus.

Apart from this, a cutting edge technology-based turbine ventilator called WeanX is slated to be launched in mid of this August. The upcoming WeanX ventilator promises to be an all-weather ventilator solution for hospitals and healthcare facilities and patients.

“With the authorities entrusting us with the responsibility to accelerate and scale up manufacturing of ventilator units, we have responded in equal measure. In fact, right from start, our intent has been to serve smaller towns as well apart from the big towns. And so realizing that there is general lack of availability of a centralized gas infrastructure in our country not only in smaller towns but even bigger towns, we decided to focus on the development of a turbine-driven ventilator wherein the room air itselfcan be harnessed to create a pressurized flow of the air. This also means better trigger function and shorter or near-negligible inspirational delay for the patient. Moreover, the devices would come in both invasive and non-invasive modes implying that it can be deployed for the widest severity range in terms of patient condition, from most severe, critical and acute to less severe and milder cases, explained Mr. Ashok Patel, the founder and the brain behind Max ventilator.”

Keeping in mind the surging prices in the country particularly in the wake of the Covid-19 battle, the company have worked out WeanX in a way that it would also offer HFNC (O2 Therapy) mode too. The technology would make it possible that the ventilator would not only work with low pressure and less oxygen, it would also ensure delivery of high FiO2, better gas exchange, efficient mucociliary clearance and ultimately reduced work of breathing for the patient.

“While we worked tirelessly to augment our ventilator manufacturing capacities during the pandemic, during our conversations with doctors and specialists, we found that during the initial hours of virus attack, as soon as lung inflammation starts, breathlessness is felt. And during this phase if oxygen is provided through HFOT device, chances ofsurvival are almost 100 percent. And even more promisingly, unlike ventilators, HFOT devices do not have any side effects. So we have come up with this HFOT solution that we are going to released earlier, added Mr Patel.”

Equally notable is that Weanx has been made compact and portable and therefore it can be used in home, ambulatory and hospital settings. Designed to give world-class experience, the company has made sure that it has been put together in sync with international standards. And last but not the least, as the name itself suggests, WeanX would also prove to be a great device for helping patients in weaning, a process by which a patient is progressively taken off artificial devices until he can breathe successfully on his own.