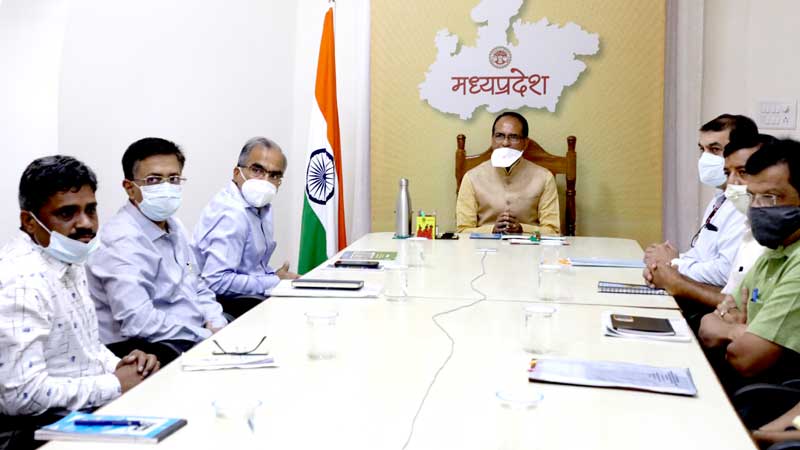 Bhopal : Chief Minister Shri Shivraj Singh Chouhan has said that best arrangements are being made to compensate for the losses caused to the crops of farmers of the state due to excess rainfall. After providing instant relief amount to farmers under short term efforts, guidance related to agricultural work will also be provided to them under long term scheme. Chief Minister Shri Chouhan was holding a discussion with the Inter-Ministerial team of officials of Government of India. Chief Minister Shri Chouhan today thanked the team which called on him for touring the districts affected by excess rain and floods and assessing crop damage.

Continuous guidance will be given regarding crop pattern

Chief Minister Shri Chouhan said that taking into account the damage caused to crops by excess rain and floods, the Department of Agriculture and Farmers Welfare will provide continuous guidance to farmers regarding crop pattern. Farmers who depend on only one or two major crops will be motivated to adopt intercropping. In the olden times also, farmers have been reducing the possibility of damage and finding a way to get more benefits by sowing four crops in a year. Today farmers have come forward to produce maize and paddy instead of soybean alone. Farmers will be benefited by adopting a practical solution for both Rabi and Kharif. Farmers will be offered guidance on the climate of Madhya Praewsh, sowing according to soil and benefitting from horticulture. Joint Secretary-in-charge of the Inter-Ministerial team Shri Rajveer Singh informed the Chief Minister Shri Chouhan about the meetings with senior officials of the state government and related works undertaken. Agriculture Production Commissioner Shri K.K. Singh, Principal Secretary Agriculture Shri Ajit Kesari were present in the meeting. The Inter Ministerial team that came to meet Chief Minister Shri Chouhan comprised of Commissioner, Fisheries and Animal Husbandry Smt. Sulekha, Joint Director Shri N. Satyanarayan, Under Secretary Shri Harit Kumar Shakya, Shri Ghanshyam Meena, Director FCD Shri Subhash Chandra Meena, DGM of Food Corporation of India Shri Virendra Kumar Bharti, besides officials of Mandi Board, Institute of Seed Certification, Directorate of Agricultural Engineering and Agriculture Department of Madhya Pradesh.