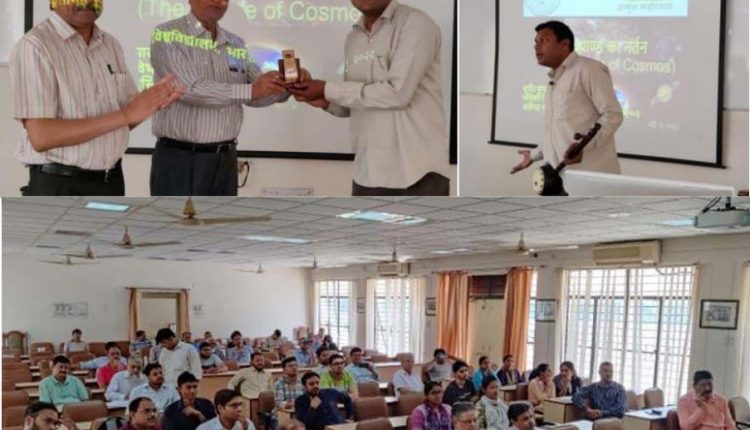 Aligarh: The International Astronomy Day 2022 was observed at the department of Physics, AMU today. This event is celebrated globally on 2nd May to create awareness about astronomy among the masses across the globe since the year 1973.

The main speaker Dr Sudhir Kumar Gupta talked about the origin of the Cosmos, its evolution, the underlying geometry of the Universe, and the associated physics theories. He also discussed ; how the Universe originated as a singularity of infinite energy density about fourteen billion years ago leading to the big bang theory and inflation in a very early stage.

He also briefed the slow expansion which caused various epochs in which the matter and energy competed for its existence. He shed light upon the possibilities of existence of exotic stuff of nature including black holes, monopoles and the possibilities of multiverses in matrix theories of physics.

Prof Bhanu Prakash Singh, Chairman of the Department, enlightened the role of India in using   astronomy for society and the modern developments of the branch of Astronomy since the discovery of the telescope of Galileo Galilei in the year 1604.

Syed Hasan Shahid Rizvi discussed the contribution of the physics department in the field of astrophysics.

The event was attended by over 60 members of the department. Prof BP Singh thanked the speaker and a memento was presented to Dr Gupta.

iednewsdesk May 2, 2022
Recycling remains popular with local government leaders in Michigan, which recently established a goal of…

University of Leeds: Loneliness leads to higher risk of future…