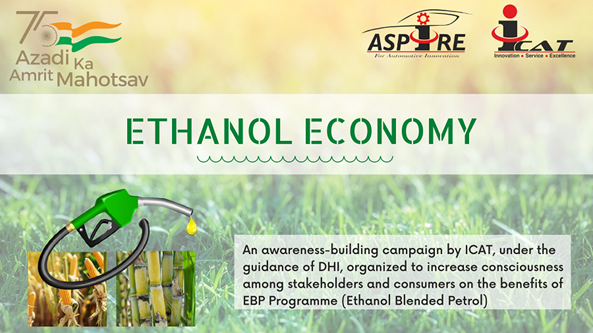 Experts from India and global who have been working on developing vehicles and infrastructure to support Ethanol Economy shared their experiences in the webinar highlighting opportunities and challenges which one might face while adopting and developing technologies for Ethanol Blended Fuels. Ideas, new proposals and new suggestions to enable a smooth adoption of EBP fuels in India were also discussed. Prime Minister announced the target of achieving 20% ethanol-blending with petrol by five years to 2025 as it looks to cut dependence on costly oil imports. Blending petrol with ethanol will cut down the dependency on imports. Government of India is expecting investments of up to INR 41,000 Cr to help India achieve its ethanol blending target of 10 percent by 2022 and 20 percent by 2025.

Shri Dinesh Tyagi, Director, ICAT and Member Secretary, Governing Board, ASPIRE inaugurated the webinar. In his address, he emphasised the need of embracing Ethanol Economy in view of energy independence and sustainability for India.

Dr. SSV Ramakumar, Director R&D, IOCL who is also one of the co-authors of Ethanol Economy Policy document prepared under Niti Aayog presented the current scenario of ethanol blending in the country which is to the tune of 8.5% and which is slated to increase 10% ethanol by end of FY 2021-22 by concerted efforts of Oil Marketing Companies and Various state Governments. He mentioned that current capacity of 300 Cr litres ethanol increase to 400 Cr litres for 10% blend. By 2025, it is estimated that 1000 Cr litres of ethanol will be required for the country.

Dr Reiji Mathai, Director, Automotive Research Association of India (ARAI) stated that by 2023 some places in India will be selling 20% blended ethanol, and by 2025 it will be available all across India. He mentioned that vehicle manufacturers will be addressing the challenges of ethanol blended fuels and he mentioned options of availability of E20 reference fuels locally in India is being explored with various refineries in India.

Mr C V Raman, Chief Technical Officer, Maruti Suzuki India, and President, ASPIRE Governing Board stated that ethanol blended fuels has the potential to replace 18% gasoline consumption. E20 fuels will also lead to 16% reduction in harmful greenhouse gases. However, he expressed his concerned about customer acceptability and impact of compatibility with ethanol fuels with on-road vehicles which are not developed to run on 20% ethanol blended fuel which might would result in increased fuel consumption and higher maintenance costs of vehicles. He also emphasised on the need to recognise ethanol as a carbon neutral fuel and mentioned that RON 95 fuels should be the standard for all ethanol blended fuels from E20 to E85/E100.

Mr Vikram Kasbekar, ED & CTO, Hero MotoCorp further added that automotive industry as a whole has contributed largely for the development of the Indian economy and has enhanced the overall manufacturing capability in India. He expressed his concern on E20 fuel impact on carburetted two-as large number of such two wheelers are running across length and breadth of the country. He suggested E10 to be the base fuel for a certain period of time to compensate customers for the loss of fuel economy. He stated that clarity in energy road map is imperative for the industry.

The panel discussed that awareness building is a crucial aspect for the success of EBP in India, and all stakeholders must work on spreading as much knowledge about EBP as possible. Other challenges include vehicle performance compatibility for ethanol blended petrol, reduced fuel efficiency, pricing, storage, engine reliability issues, inconsistency in character of ethanol blended petrol from various bio sources, requirement of consistency in policy across all aspects, etc. The session covered a holistic scenario of EBP in the country, the challenges and the possible solutions, like planning a long term strategy, stable pricing, consistent policies and align all developments, may be undertaken by the ministries and industry to succeed with ethanol blended fuels.

ICAT is under National Automative Board (NAB) which is the autonomous body under the aegis of Ministry of Heavy Industries.

NXTDIGITAL announces the rollout of its 100 NXTHUB project from Ranchi

Renowned poets will present their poetry and couplets on the “celebrations of India’s independence” while remembering the sacrifices made by the great freedom fighters: Mukhtar Abbas Naqvi

University of Exeter: Internet use during pandemic linked to increased…

University of Exeter: Experts to establish new archive of Kurdistan’s…

University of Exeter: Immigration rules mean reforms to give domestic…

University of Exeter: Smartline shortlisted for the Housing Heroes…

University of Exeter: Efforts to take fake news and misinformation in…