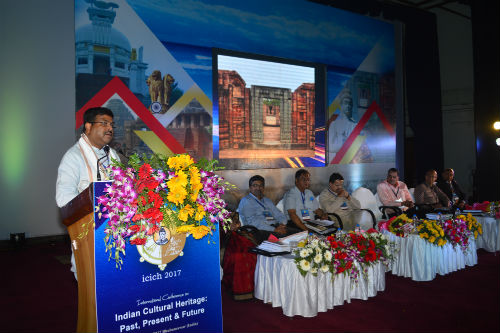 Bhubaneswar: “Indian Culture has always generated global interest from ancient period. Multi faceted and multi layered, it has constantly regenerated itself through the centuries. Indians are also the largest diaspora in the globe. For centuries, Indian culture, especially the Odishan culture has moved out of the mainland and has created new hues across the globe. Our young generation need to be rooted in our culture, rediscovering and reassessing our cultural heritage with its language, literature, religious faith, architecture and festivals” said Dharmendra Pradhan, Union Minister for Petroleum and Natural Gas. He was addressing the inaugural ceremony of 3-day ‘International Conference on Indian Cultural Heritage: Past, Present and the Future’ here.

Utkal University in association with Institute of Media Studies (IMS), Bhubaneswar is organizing this unique conference from 18 – 20 March 2017 at Bhubaneswar supported by Indian Council for Cultural Relations (ICCR) and OdishaLIVE as knowledge partner.

“The conference will address all concerns relating to Indian cultural heritage. It would provide a platform to discuss, debate, exchange ideas and viewpoints leading to a better understanding of Indian culture, carrying forward the essence and securing its future” mentioned Prof. Upendra Padhi, Convenor, ICICH and Director, Institute of Media Studies (IMS), Bhubaneswar.

The conference is expected to enable the policy makers, academia, scholars, researchers, historians, performing artists, tourism & media professionals, critics, writers, students and the youngsters in particular to appreciate, strengthen and reassess the Indian Culture. Hundreds of participants have joined the conference from four SAARC countries including India, Nepal, Bhutan and Sri Lanka.

The Conference is aimed to promote the rich and diversified cultural heritage of India as well as to deliberate the historical scenario and present issues related to Indian culture. This also intended to strengthen the cultural exchanges and retying the knots with SAARC countries by analyzing the present policies and identification of new areas. Three publications are released during inaugural function – ‘Abstracts’, ‘Aitithya’ (Souvenir of the Conference) and the ‘Proceedings of the International Conference’.

Beside cultural exchange and ceremonial programmes, one of the major attractions would be the Plenary Sessions on 19th and 20th March at DDCE, Utkal University campus, where more than 80 scholars from various countries will read out their intellectual papers and will provide a platform to discuss, debate, exchange ideas and viewpoints leading to a better understanding of Indian culture, carrying forward the essence and securing its future. Interested people can obtain more information from the Conference Website www.icich.org.