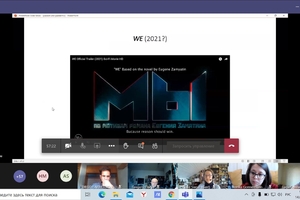 International conference on the problem of pandemic in literature, cinema and culture

The Zoom and Teams platforms hosted the international conference “Living in the End Times: Utopian and Dystopian Representations of Pandemics in Fiction, Film and Culture”, organized by the University of Cappadocia in Turkey.
The organizing committee of the conference included representatives of the universities of Great Britain (Nottingham Trent, Essex, Warwick, Manchester, Birmingham, Nottingham universities), USA (Harvard University), Canada (University of Albert), Turkey (Bosphorus University). Irina Valerievna Chepurina, a senior lecturer at the Department of German Philology and Scandinavian Studies of the Institute of Philology, managed to become a listener of this large-scale scientific event.

At the conference on the problem of the pandemic in literature, cinema and culture, 211 participants from 42 countries presented their reports. During the conference, 50 thematic sections worked, which covered a wide range of issues: apocalyptic and post-apocalyptic literature, the concepts of the Anthropocene and the capitalocene, posthumanism, ethics and politics, language and technology, gender theory, the future of urban design and many others.

Among the invited guests are the American writer Kim Stanley Robinson, the author of the famous “The Martian Trilogy”, as well as Tom Moylan, the famous American literary critic, author of “critical utopianism”. A community of conference participants was created on the Discord platform, which allowed for discussions and conversations outside the established sections.

Seminar on the results of students’ scientific work

PetrSU: On the results of the career guidance work of the Department of Management and Social Development for 2020