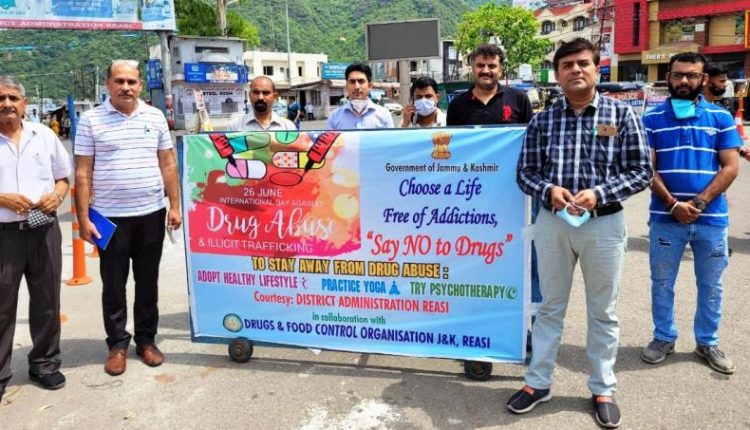 JAMMU: Series of awareness events including online webinars, art competitions and other activities were today held by judicial organizations, UT and Central Departments, educational institutions across Jammu Division to observe the International Day against Drug Abuse and illicit Trafficking.

D&FCO: Drugs & Food Control Organisation, J&K, Jammu, organized several awareness programs across the Jammu Province. A rally was organized by the organization amid strict adherence to Covid safety protocols to propagate awareness amongst the general masses regarding the ill effects of drug abuse.

Senior Officers of the Department, Members of Jammu Chemist Association and Jammu Pharmaceutical Distributors Association were part of the rally which start from Shalamar , in front of Shri Ranbireshwar Temple and culminated at Shalamar Chowk,Jammu .

The Program me was conducted under the guidance of SSP ANTF Vinay Sharma, who was also Chief guest and under the Supervision of Nissar Ahmed- OSD Deputy Director of NYKS, Jammu.

The Webinar was organized as a measure to generate awareness on the problem of drug abuse.

At Katra: International Day Against Drug Abuse and Illicit Trafficking was observed at Katra by organizing an awareness programme in the presence of Block Medial Officer, Dr Gopal Dutt along with staff members of CHC Katra and Pharma Trade.

Meanwhile, on the directions of Deputy Commissioner Charandeep Singh, an informative banner was fixed on the wall of the main block of the DC office to be observed by all who enter the DC office Reasi.

DLSA REASI: To spread awareness against Drug abuse and Illicit Trafficking, which are important issues of current times, District Legal Services Authority, Reasi under the guidance and supervision of R.N.Wattal, Chairman, observed “International Day against Drug Abuse and Illicit Trafficking with this year’s ‘Share Drug Facts to save Lives” by organizing an Online Program in collaboration with Government Degree Colleges of Reasi, Pouni and Katra.

Besides this, DLSA Reasi also launched the Campaign “ACTIVITY KARONA” and organized an Online Slogan writing and Painting competition on the topic “Drug Abuse” in which the students of different standards of High School, Ghair Mari and High School, Kambaldanga, zealously participated and displayed their talent through Online Jitsi Meet.

Further, Tehsil Legal Services Authority, Mahore also organized an awareness program today through their Para Legal Volunteers who distributed the pamphlets among the general public at Mahore with an aim to spread awareness about the global drug problem and acquainted them regarding drug awareness menace.