International Day of Education: Meet Angel and Fatma from Tanzania

‘If a woman is uneducated, unemployed, doubtful and unable to stand on her own two feet, life can be cruel to her’, says Asela Mataba, Angel’s mother. Angel, aged 17, is a student at Ngweli secondary school in Sengerema, Tanzania.

Tanzania has one of the lowest rates of secondary education enrolment in Africa at 32%, with challenges in the transition from primary to secondary school. This is especially the case for girls.

While progress has been made in ending child marriage and increasing access to education for both girls and boys, the COVID-19 crisis has exacerbated the existing challenges faced by girls. These include deeply rooted socio-cultural norms and practices that have been institutionalized in society and the education system, limiting opportunities for girls to access, stay in and complete their education.

Angel learns to believe in herself

Gender bias often prevent girls from pursuing science, technology, engineering and mathematics (STEM) subjects leading to low female representation in STEM careers. In Tanzania, poor pedagogical practices have led to discrimination and girls’ lower performance than that of boys in mathematics and science subjects in national examinations during the past five years.

To counter stereotypes and socio-cultural bias reinforcing the notion that science subjects are for boys and difficult for girls, teachers at Angel’s school received training on gender-responsive pedagogy where they learned to teach with the specific learning needs of girls and boys in mind. Since the training, teachers have encouraged more girls to participate in science-related activities.

With support from her teacher, Angel’s performance improved as she told herself, ‘Angel, you will not fail.’ She believed in herself and that girls can do as well as boys in STEM subjects. ‘I became number one in physics this term’, says Angel.

Angel also participates in youth club activities where students speak out on issues that concern their education and life. Youth club members also learn new skills, receive trainings on comprehensive sexuality education and entrepreneurship, and have access to mentorship opportunities. Angel is helping run the school canteen with her 62 other youth club members where they apply entrepreneurship skills they acquired.

Fatma gets a second chance 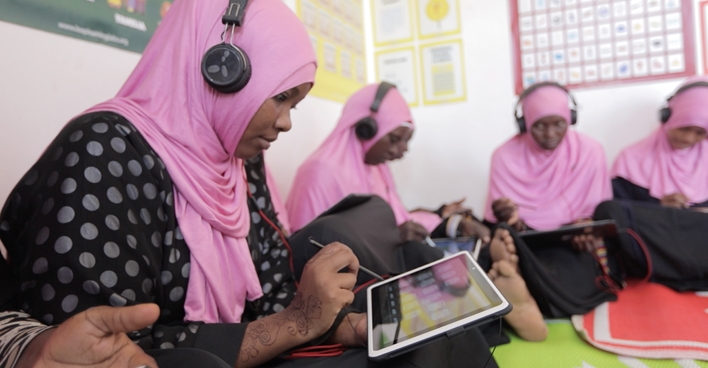 Life prospects for girls in Tanzania without an education, and the knowledge or skills for employment, are limited. Lack of opportunities for entrepreneurial and vocational skills development at local level further hampers young women’s possibility of engaging in meaningful employment or self-employment after dropping out of school.

‘After dropping out of school, for most girls, their only choice is marriage’, says Mohamed Khamis, Fatma’s father. ‘When the programme started, I was hopeful because it meant Fatma would have the chance to continue learning.’

Fatma joined a community-based youth center where basic literacy, numeracy and digital skills are taught. ‘Before I joined the programme, I could not read a full sentence’, says Fatma. ‘Now I am able to read and write and help others learn to read.’ She also learnt digital skills, such as using tablets to access other learning materials, as well as entrepreneurship and vocational skills.

Fatma received a second chance to pursue her dream. ‘I am planning to open a shop where I can sell my products and teach other young women to knit fabrics’, she says.

To reduce the spread of the virus, schools in Tanzania were closed for four months, from March to June 2020. Angel and Fatma’s learning was interrupted during that time.

‘COVID-19 disrupted our learning’, said Angel and her peers. ‘Getting help from peers or teachers was not possible other than through mobile communication. Many of us do not have access to personal mobile devices.’ When schools reopened, Angel was happy to return to school. However, she and her peers lost hours during the school closures and had to study outside of school hours to catch up with the curriculum.

Fatma’s classes at the community-based youth center were also put on hold but she continued practicing her sewing from home instead. A few of Fatma’s peers came to the center and made masks to sell during that time.

At the peak of the pandemic, UNESCO estimates over 13 million learners in Tanzania were out of school, including nearly 7 million girls and young women. Tanzania was the first country to re-open its schools among East African countries in June 2020, and the Joint Programme continues to work with communities to ensure girls continue their education.

Neema Zakaria, Angel’s teacher and a girls’ education champion, emphasized parental guidance as key to support girls’ education. ‘We work closely with parents and guardians. We talk about issues that concern adolescent girls and their education such as gender-based violence in schools and at home.’

Learning is critical to the future of girls like Angel and Fatma. ‘The importance of education reaches across the jobs and lives we wish to lead. Nowadays, even to be a good farmer, you need knowledge and skills on the use of proper fertilizers to get more crops’, said community members from the Sengerema district.

Community members are also engaged in creating safer and girl-friendly learning environments for girls like Angel and Fatma. Angel’s mother’s words resonate with efforts to help girls continue their education: ‘When you empower girls and women, you empower boys and men, children and the people around them.’