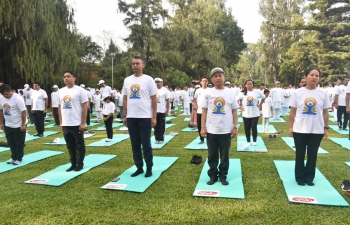 Kathmandu: 8th International Day of Yoga was celebrated by Embassy of India, Kathmandu, in the august presence of Rt. Hon. Prime Minister Mr. Sher Bahadur Deuba. On the occasion, Rt. Hon. Prime Minister, in his remarks mentioned that practising Yoga gives positive energy to body and mind and that it should be made a part of one’s daily life. Hon. Minister for Communication and Information Technology Mr. Gyanendra Bahadur Karki attended the event as Guest of Honour and encouraged everyone to do yoga regularly. Charge d’Affaires Ms. Namgya Khampa in her welcome remarks emphasized that the ancient tradition of yoga is our shared civilizational heritage and should be spread for the benifit of entire humanity.

The event was part of the ongoing celebrations under India@75 ‘Azaadi ka Amrit Mahotsav’. The theme of the celebration this year was “Yoga for Humanity” with focus on numerous benefits of Yoga for everyone.

A lecture-cum -demonstration of Common Yoga Protocol approved by Ministry of Ayush, Government of India, was organized at the Embassy. Nearly six hundred Yoga enthusiasts attended the session. The event was broadcast live on Doordarshan as part of the ‘Guardian Ring –One Sun, One Earth’ initiative of the Government of India.

The International Day of Yoga has been celebrated annually on 21 June since 2015, following adoption of a resolution co-sponsored by 177 member states at the United Nations General Assembly in 2014.