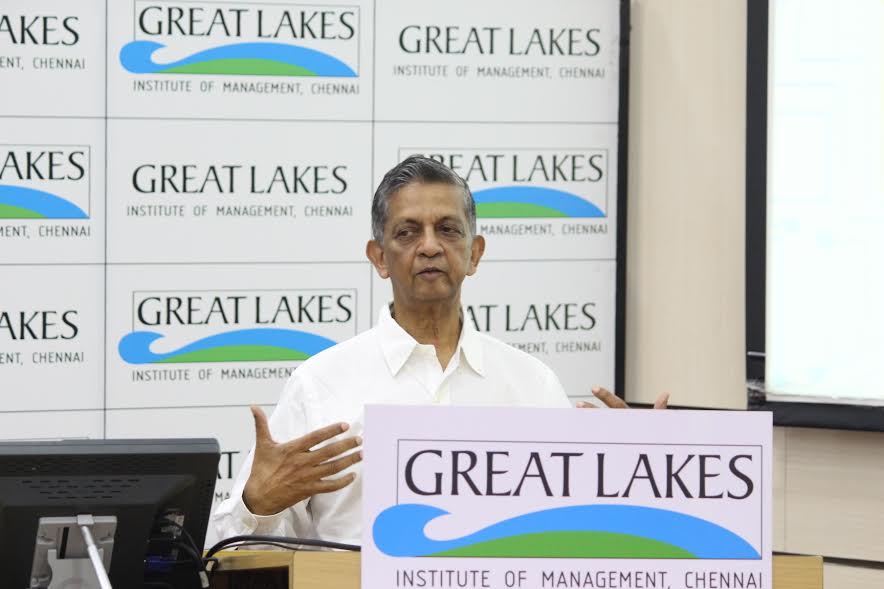 By India Education Diary Bureau Admin Last updated Apr 23, 2020
Share
Chennai: Great Lakes Institute of Management, a premier B-School in the country, organized its 9th International Entrepreneurship Conference at its campus at Manamai. This year’s conference was based on the theme ‘FINTECH – REAL DISRUPTION? OCEAN OF OPPORTUNITIES?’. Organized every year by the Centre for Innovation and Entrepreneurship Committee at Great Lakes, the conference aims to contribute to India’s grassroots- level economic development by creating, nurturing and sustaining successful business enterprises. The conference also enables the mushrooming of socially- responsible entrepreneurial ventures built on a foundation of creativity and innovation.
The speakers for the 9th IEC included Guest of Honor Mr. P.N Vasudevan (Founder & Managing Director, Equitas Holding Ltd), Chief Guest Dr. S Narayan (Retired IAS, Ex Secretary and Government of India) and Keynote Speaker Mr. Sanjay Swamy, Co-Founder / Managing Partner, PRIME.
Dr. Bala V Balachandran, Founder, Dean & Chairman of Great Lakes, in his inaugural address said that a country like India which has a large workforce and yet has unaddressed concerns like lack of specific skill-set and subsequent income generation, should focus more on entrepreneurship and skill development. “Encouraging entrepreneurs is very critical in order to eliminate any disparity we see today. Take the risk and not only invest your money, invest your time and passion in order to empower other people”, he said.
Talking about the changing digital landscapes in FinTech, Mr. Vasudevan shared his thoughts about the possibilities of FinTech companies and Banks co-existing in the future. “The rise of Fintech has forced banks to re-think the way they interact with their customers. Rather than FinTech companies taking over Banks or vice-versa, these two entities should use the strengths of each other to work together.” While banks being a regulated entity safeguarding customer confidentiality and money, and FinTech companies having the strength to creating an innovation layer enabling speed to scale, it would be of immense benefit to the people if these two can work together, he said.
Related Posts

May 17, 2021
Drawing comparisons between India and China in FinTech industry, Mr. S Narayan spoke about how China has emerged strongly in FinTech than the western countries, as against what one would assume. “Four-fifth of all Fintech happens in China which has 700 million internet users with an internet connectivity that is four times better than India. More so, all these transactions happen in their own language Mandarin, which is a huge advantage to them”. The former Secretary of GOI also opined that implementing such initiatives in a lingualy fragmented country like India might be a challenge, but it is still doable. “We must learn from China. They invest small amounts in FinTech apps, this investment is available for borrowing and this borrowing decision is based on the data available on consumer spending. This is something we can adapt”, he concluded.
Mr. Sanjay Swamy highlighted how the growing success of Jandhan, Aadhar and digital India could be the next step towards making India a presence-less, paperless and cashless service industry. “India has a two-faced infrastructure – while we may still lack in physical infrastructure, we are growing at tremendous pace in Digital infrastructure. We are moving towards becoming a digital country, probably the only country, which through its Aadhar card, created a difference between an identity and an entitlement. This is a digital real-time verification mechanism and not just a smart card.” With Aadhar, Digital lockers, Unified Payment Interface and all the other digital advancements, India will go from data poor to data rich country in five years, allowing data driven decision making for scale and inclusion, he remarked.
The event also witnessed a Panel discussion on the topic ‘FINTECH – REAL DISRUPTION? OCEAN OF OPPORTUNITIES?’ moderated by Dr. Prof. K C John, Professor – Design Thinking and Entrepreneurship, Great Lakes Institute of Management. The panelists for the session were Mr. Sanjay Bhargava, Chairman and CEO of Bharosa Technoserve Pvt. Ltd. and Mr. Ravi Rajagopalan, CEO of Empays Payment Systems.
The 9th International Entrepreneurship conference concluded with Prize Distribution to the winning teams of Business Plan competitions – “PaisaVasool, Oyster, and Hyperion”, conducted at Great lakes prior to the conference.
Share FacebookTwitterGoogle+ReddItWhatsAppPinterestEmail