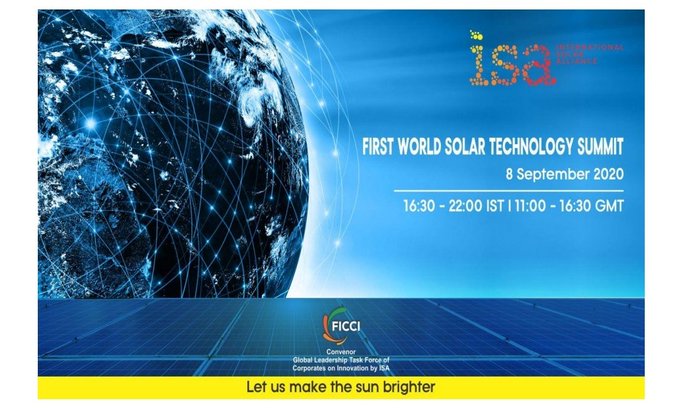 New Delhi: Curtains go up on the first World Solar Technology Summit (WSTS) being organized by the International Solar Alliance (ISA), tomorrow afternoon (8th September, 1630 hours IST). More than 26000 participants from 149 countries have registered to join the virtual Summit which is expected to bring the spotlight on accelerating affordable and sustainable clean green energy by showcasing and deliberating on innovative state of the art next generation technologies in solar power.

Shri R.K. Singh, the President of the ISA Assembly and India’s Power and New & Renewable Energy Minister, and Ms Barbara Pompili, the Co- President of the ISA Assembly and France’s Minister for Ecological Transition will be joined by the Vice Presidents of ISA from Africa, Asia Pacific and the Latin American and Caribbean Region (LAC) during the inaugural address. Prof K. Vijay Raghavan, Principal Scientific Adviser to the Government of India will grace the inaugural and set the context for the deliberations.

Nobel Laureate, Dr M Stanley Whittingham, winner of the Nobel Prize in Chemistry (jointly with John B Goodenough & Akira Yoshino) in 2019 for the revolutionizing discovery of the lithium ion batteries will deliver the key note address in the inaugural. Mr Bernard Piccard, Founder and Chairman of Solar Impulse Foundation, Switzerland will address the gathering.

The inaugural will witness the rolling of an action- packed agenda with the conclusion and announcement of three agreements between ISA and International Institute of Refrigeration, a second with Global Green Growth Institute and a third agreement with National Thermal Power Corporation. A tripartite agreement between India’s Ministry of New and Renewable Energy, the World Bank and the International Solar Alliance is also set to be inked. ISA’s technology journal, Solar Compass 360 will also be launched during the summit by Dr Dharendra Yogi Goswami, Professor in the University of South Florida and Director of the Clean Energy Research Centre.

The Global CEO’s session which follows the inaugural will see a moderated discussion between the CEOs of the world’s largest corporations that contribute greatly towards the promotion of solar energy integration with other renewables and storage for sustainable energy solutions. Four technical sessions will see a galaxy of renowned academicians, scientists, researchers as well as industry leaders deliberate on the future prospects of the solar PV technology and the vision for solar energy up to 2030 and beyond. Equally interesting sessions have been planned on exploring low cost – electricity (Towards a Decarbonized Grid) followed by intense deliberations on Disruptive Solar Technologies and Solar Beyond the Power Sector.

The valedictory session of the WSTS will be marked by the presence of high -level representatives of the International Renewable Energy Agency (IRENA) and the International Energy Agency (IEA). The Vice president of ISA representing the Asia Pacific region, Minister from Tonga, Mr Paosi Mattaele Tei and the Minister from Sudan, Eng Khairy Abdelraman Ahmed will deliver the key note address. Ministers from India, the Railway and Commerce and Industry Minister Mr Piyush Goyal and Petroleum and Natural Gas Minister, Mr Dharmendra Pradhan will deliver the Chief Guest and Valedictory address respectively. The session will also be graced by the Secretary External Affairs Ministry, Mr Rahul Chhabra; Power Secretary, Mr S.N. Sahai; New and Renewable Energy Secretary, Mr Indu Shekhar Chaturvedi. The PM’s Sherpa to the G7 and G20, Mr Suresh Prabhu will send a message to the Summit.

The Federation of Indian Chambers of Commerce and Industry (FICCI), as the convenor of ISA Global Leadership Task Force on Innovation, is working with ISA in organizing the summit.