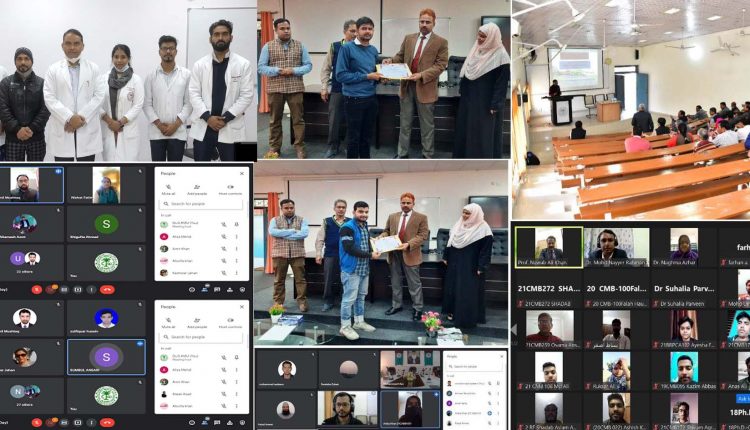 Aligarh : BSc Computer Applications student, Aman Tariq won the online speech competition of the Department of Computer Science, Aligarh Muslim University (AMU) on ‘Role of ICT in Localization and Promotion of Matribhasha’. The competition was held to mark the ‘International Mother Language Day’ observations and celebrate linguistic and cultural diversity and multilingualism.

Congratulating the winners, Prof Aasim Zafar (Chairman, Department of Computer Science) stressed the need for the promotion of mother tongues and emphasized the role that Information and Communications Technology can play in it.

He also distributed certificates to the winners.

Faculty members, Dr Shafiqul Abidin, Dr Swaleha Zubair and Dr Mohammad Sajid pointed out that programmes such as the speech competition held to mark the International Mother Language Day help the creating awareness on the need for preserving and protecting languages and dialects.

Dr Swaleha Zubair, Dr Faisal Anwer and Dr Mohammad Sajid were in the jury that judged and announced the competition results.

He was speaking on the Bengla Language movement of Bangladesh and the role of academicians in promoting scientific and technical communications in native languages.

At the Department of Commerce, Prof Nawab Ali Khan (Chairman) remarked that languages are not just a means of communication but they represent vast cultural and intellectual heritage.

He was speaking on the promotion and application of native languages at the International Mother Language Day observations.

The occasion was observed at the Department of Library and Information Science with faculty members delivering speeches on importance of mother tongue and native languages across the Country.

Prof Nishat Fatima (Chairperson, Department of Library and Information Science) spoke about the use of native languages in religious and other texts and the need for seminal work in native languages.

The celebrations of this day serve to remind us of the importance of language as a cultural asset and all the activities to observe the occasion will help in raising awareness on the importance of protecting and preserving mother tongues, said Prof G S Hashmi (Chairman, Department of Oral Maxillofacial Surgery).

S Ahtasham Akbar extended the vote of thanks.

School Superintendent, Umra Zaheer explained the use of technology for multilingual learning challenges.

Massachusetts Institute of Technology: Light could boost performance of fuel cells, lithium batteries, and other devices

University of São Paulo: USP working group will contribute to the…

University of São Paulo: The secrets of geology in cooking, tourism…

University of São Paulo: Breaking patents on medicines represents an…