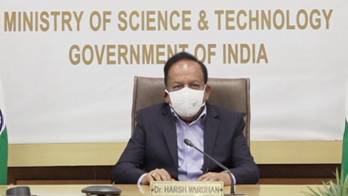 New Delhi: International Science Film Festival of India (ISFFI) is a major attraction of India International Science Festival 2020. This year, the ISFFI has received 634 science film entries from 60 countries. This is a vital platform to attract enthusiasts and young film-makers towards science film making and contribute in science popularization.

Speaking at the inaugural session of ISFFI, Dr. Harsh Vardhan, Union Minister of Science & Technology, Earth Sciences and Health & Family Welfare said that these films have a huge variety as they are based on themes like science, technology, awareness related to COVID-19 and India’s efforts to be self-reliant. Science film is a good medium to communicate science.

“Every year the film festival is growing in size and scale. This event has now become a vital platform for handholding the upcoming science film makers. There is a huge potential and we can share our experience to nurture them” said Shri Mike Pandey, Filmmaker and ISFFI jury chairman.

Dr. Uy Hoang, President, Public Health Film Society, United Kingdom said that science communication is poised to face the challenge of bringing people together and film makers have started addressing this issue and hopefully it is going to be achieved.

“We have a good experience of holding film festival as before this, we conducted the 10th edition of National Science Film Festival virtually and for this film festival, we are equally enthusiastic”, said Dr. Nakul Parashar, Director, Vigyan Prasar. Shri Nimish Kapoor, the Coordinator, ISFFI said that all efforts were being made to harness the potential of the medium of films to popularize science. “We will screen more than two hundred films online, during the IISF. The title of the award winning films will be announced on December 25, Shri Kapoor informed.

The International Science Film Festival of India seeks to promote science popularization among citizens and aims at attracting talented young science film-makers and science enthusiasts. This event offers an opportunity for students and film makers to get involved with the process of science communication through films.