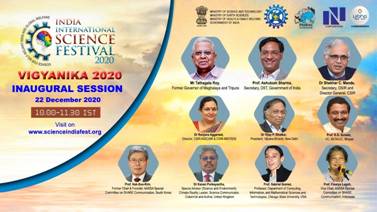 New Delhi: CSIR-National Institute of Science Communication and Information Resources (CSIR-NISCAIR), Ministry of Earth Sciences (MOES) and Vijnana Bharati (VIBHA) jointly organised the inaugural session of Vigyanika-International Science Literature Festival on the opening dayof IISF 2020 on the virtual platform to mark the birth anniversary of Srinivasa Ramanujan.Addressing the participants and invitees, Dr Ranjana Aggarwal, Director, CSIR-NISCAIR & CSIR-NISTADS stated that the event is aimed to take science and literature to the masses and showcase strategies to employ various aspects of science communication to promote self-reliance and global welfare. Dr Shekhar C. Mande, Secretary, DSIR and Director General, Council of Scientific & Industrial Research, who delivered the keynote address, expressed his excitement for taking the scientific literature to the general public through the event ‘Vigyanika’. He highlighted the importance of science communication in fighting the current COVID-19 ‘infodemic’ and fake news. Shri Tathagata Roy, former Governor of Meghalaya and Tripura who was the chief guest of the inaugural session said the superstition meddles with our scientific thinking and there must be a distinction between superstitions and our religious outlook.

Prof. Ashutosh Sharma, Secretary, Department of Science and Technology, who delivered the presidential address emphasized the importance of IISF to amplify universality of science and how it seeks to fulfil the directive in Indian constitution to develop the scientific temper, humanism and inquiry and inform so that India can progress. He highlighted the importance of the event ‘Vigyanika’, stating the importance of science communication for scientists as well as for the public. Dr Vijay P. Bhatkar, President, Vijnana Bharati, was the Guest of Honour exhorted the need for enabling integration of local languages with technology to sustain and preserve science communication in regional languages in our multilingual country.

Prof. FinaryaLegoh, Vice-Chair, AASSA Special Committee on SHARE Communication, Indonesia talked about lessons learnt during COVID-19 pandemic and the resilient nature of human spirit. She emphasized on how science communication can provide solutions to pandemic and to help mitigate consequent challenges during the pandemic by providing policy briefs to different stakeholder, information for awareness. Prof. K.G. Suresh, VC, Makhanlal Chaturvedi National University of Journalism and Communication, Bhopal gave his views on traditional communication. He highlighted the need of science communication to accommodate not just regional languages, but dialects and rich folklore to reach the population deprived of digital space. Stating the saying, “Catch them young”, he exhorted the need for glamourizing science to attract a young audience to inculcate scientific temperament among them.

A session on ‘Science literature in Indian regional languages’ was chaired by Mr Nandan Kudhyadi, Science film maker, Ex-member of Academic council of the Film & Television Institute of India, Pune. In his introductory remarks, he talked about the importance of science fiction in science communication and passion of science communicators to popularize science in regional languages. Dr Ashutosh Jawadekar, a dentist by profession who is associated with Dinanath Mangeshkar Hospital, Pune talked about science fiction and scientific literature in Marathi. He said science and literature go hand in hand, and complements the rich Marathi heritage of India. He addressed the lacuna in the field of science fiction Marathi poetry and statistical analysis to gauge the Marathi science literature readership.

Dr T.V. Venkateswaran, Scientist F, Vigyan Prasar, New Delhi shared about different media to communicate science in Tamil. Moreover, he talked about different science fiction stories in the history of Tamil literature and movies for students and young adults. He summarized the communication trends observed in the contemporary world today as hard (didactic), speculation (fantastic) and social (critique). Mr ASKVS Sharma, Former Chief Scientist, CSIR-Central Food Technological Research Institute, Mysuru opined on the need for more growth and efforts in the field of science fiction in modern Kannada. He took us back to the very first science fiction story in Kannada, Pashubala published in 1928.

Prof. (Dr) Dipak Kumar Sarma, Professor of Surgery & Head of the Department of Emergency Medicine, Gauhati Medical College & Hospital, Guwahati, Assam discussed the history of Assamese science literature and its development towards the field of science fiction and fantasy. He talked about effective science fiction writing with local values and ethics, making it acceptable to different parts of the society and the role of translation in the field of science fiction. All the panelists discussed the major challenges in communicating science in regional languages and measures needed to fill up the lacunae for making science fiction an effective medium to communicate science.

In the inaugural session of ‘Women Scientists and Entrepreneurs Conclave’, Smt. Smriti Irani, Union Minister, attended as the Special Guest. The Chief Guest of this Conclave was Governor of Telangana, Dr. Tamilisai Soudararajan.

Wellness Conclave is focusing on the health, fitness and wellness of human being. In this event, Dr. Ranjana Aggarwal, Director, CSIR-NISTADS gave welcome address and Shri Shripad Yesso Naik, Union Minister (I/C) of AYUSH was the Chief Guest of this event. Keynote Address was given by Shri Rajesh Kotecha, Secretary AYUSH.

This year IISF has incorporated a few new programs which integrate humanities with the natural sciences. Philosophy and Science is one such event of IISF 2020. The welcome address on inaugural session of this event was delivered by Dr. Sujit Battacharya. Dr. Shekhar C. Mande, DG, CSIR and Prof. Ramesh Chandra Sinha, Chairman Indian Council of Philosophical Research were the Guest of Honour. On this occasion, a Plenary Session on Science-Philosophy Interface: Indian Perspective was also organized. And in this session, Swami Atmapriyananda, Vice-Chancellor, RKMVERI (Deemed University), Belur Math, West Bengal gave the Plenary Talk.

In the event ‘History of Indian Science’, Shri Arif Mohammed Khan, Governor of Keralagraced the program as the Chief Guest. A Plenary lecture on the topic “Ancient Indian Science” was organized and the speaker for this lecture was Prof B N Jagtap, Senior Professor, Department of Physics, Indian Institute of Technology, Bombay and former Distinguished Scientist and Director, Chemical Group at Bhabha Atomic Research Centre, Mumbai.

Inauguration function of a popular event ‘Students’ Science Village’ was organized. Popular science lecture and with the help of simple demos biology learning session were organized. In these sessions, large number of students and experts participated.

In the Industry Academia Conclave(IAC), a special webinar session was organized. The topic of the webinar was “IPRs of Industry Products with Academic Know-How” and the special focus was solar and wind powered devices invented by the speaker Dr. SibhnathMaity. Dr. Maity is the former Director of CSIR-CMERI and former Controller General of Patent Design and Trade Marks.

The 6th edition of India International Science Festival (IISF) commenced from 22 Dec. 2020. In this four day long program, a spectrum of the participants, dignitaries and general public will be going to witness the largest science festival on virtual environment. Due to Covid situation, this year’s IISF is being organized online and a large number of participants (more than one lakh) will participate in this science festival.

The journey of IISF was started in the year 2015. From a small beginning, this science festival has become a huge platform for every section of the society. The central theme of the IISF 2020 is “Science for Self-Reliant India and Global Welfare”.

Ist Guinness World Record attempted of the largest number of children making Sun-Dials simultaneously, on the first day of IISF2020