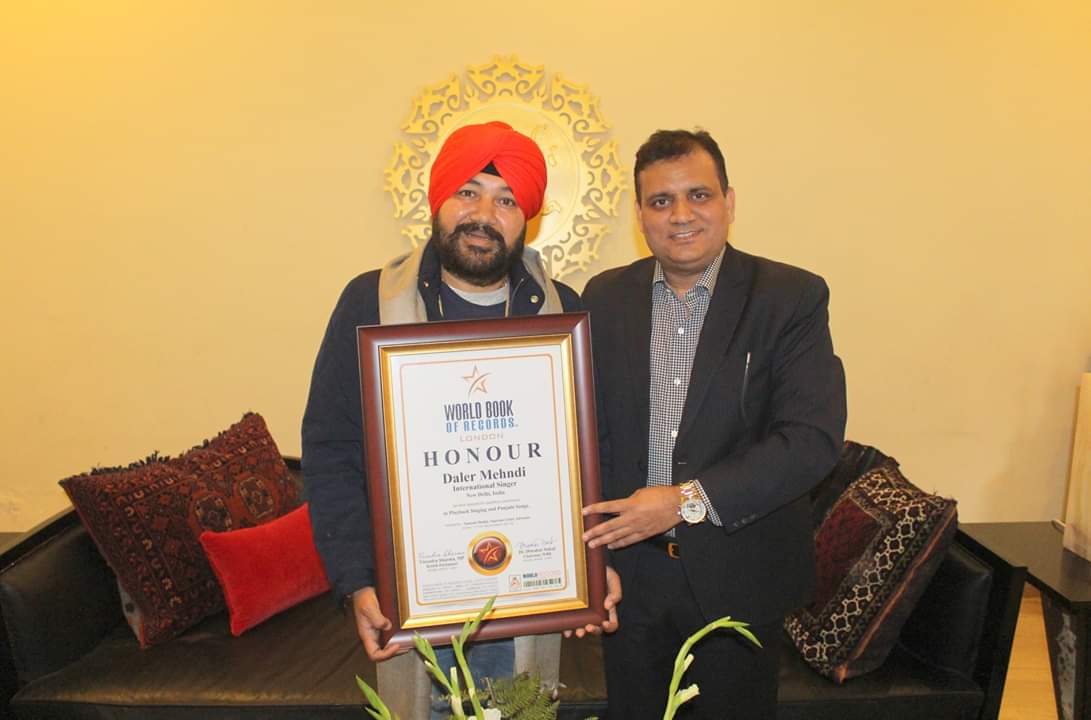 World Book of Records (WBR) is one of the leading organizations in international certification of world records. It works from UK, USA, Australia, Mauritius and India with global network. It recognizes potential of talent and capabilities in world records through international certification. Under the distinguished category of WBR London, UK, specific places, temples, forts, natural landscapes, tunnels, individuals and organizations that worked unique and contain historic, economic, social and cultural impact among people and a country are to be listed.

Significantly, he is an Indian singer, songwriter, author, record producer, performer, and environmentalist he has been credited with making Bhangra popular worldwide, and helping to set up a parallel non-film Indian pop music industry to the pre-Daler era’s then existent Bollywood music. He is best known for his energetic dance songs, his distinctive voice, turban and long flowing robes. He was born in Patna, Bihar on August 18, 1967. Bought up in a family of musicians, he has been practicing the various iterations of Indian classical music such as Ragas and Shabads from the holy book of the Sikhs ‘Guru Granth Sahib Ji.’

Mehndi has been a renowned performer, entertainer and a Industry renowned musician. He has given several hits to the music industry including the world famous Internet phenomenon Tunak Tunak Tun (1998) which is a rage on YouTube and Bolo Ta Ra Ra (1995).In The year 1997, Daler Mehndi ventured into playback singing and made his first appearance on the large screen with the Bollywood legend Amitabh Bachchan in his comeback movie Mrityudaata (1997). He has made cameo appearances in many Bollywood movies as well lent his voice for songs such as Arjun Pandit (1999) and Khauff (2000).

He has been recognized by various awards and felicitations as Winner of the Voice of Asia International Ethnic and Pop Music Contest at Almaty, Kazakhstan. Aviation Award from IBIS Aviation Ltd. Mombassa, Kenya, The Indira Gandhi Priyadarshini Award, Honored in Israel with the Title ‘King of Pop’.Honored by the Indian Cultural Society, Kuwait as the Best Pop Singer. Honored by the Federation of Indian Association New York at the annual Independence Day Parade in New York and many others of international repute

India has been completely committed to protecting the rights of its minorities: Vice President addresses Students from Stanford Graduate School of Business