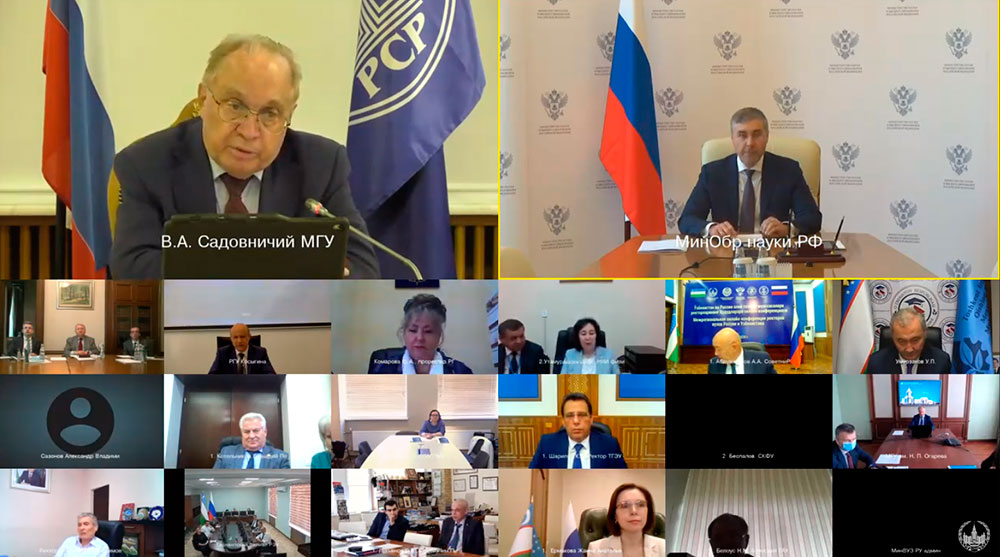 Interregional online conference of rectors of universities in Russia and Uzbekistan

President of the Russian Union of Rectors, Rector of Moscow State University named after M.V. Lomonosov V.A. Sadovnichy and Chairman of the Republican Council of Higher Education, Rector of the Tashkent Institute of Irrigation and Agricultural Mechanization Engineers Umurzakov held an Interregional online conference of rectors of universities in Russia and Uzbekistan.

The event was attended by over 200 rectors, vice-rectors and professors from universities in Russia and Uzbekistan. Welcoming remarks to the participants were addressed by the head of the Office of the President of the Russian Federation for Interregional and Cultural Relations with Foreign Countries V.A. Chernov, Advisor to the President of the Republic of Uzbekistan A.A. Abduvakhitov, Minister of Science and Higher Education of the Russian Federation V.N. Falkov, Minister of Higher and Secondary Special Education of the Republic of Uzbekistan I.U. Majidov. The speakers noted a steady mutual interest in cooperation, contributing to the development of a network of branches of Russian universities in Uzbekistan, the implementation of joint educational programs involving two degrees, academic exchanges, student practices, and joint research. The cooperation that is gaining momentum is firmly supported by the legal framework of the two countries, which ensures the removal of barriers to education by young people in our countries. The impressive successes of the joint work will invariably help in the preparation of the Second Russian-Uzbek Educational Forum, due to be held in Moscow in 2020 as part of the meeting of the leaders of Russia and Uzbekistan.

In his plenary report, Academician V.A. Sadovnichy spoke about the main forms and achievements of scientific and educational cooperation between universities in Russia and Uzbekistan. A new impetus to inter-university cooperation between the two countries was given by the holding in October 2018 on the sidelines of the state visit of the President of the Russian Federation V.V. Putin to Uzbekistan of the First Russian-Uzbek educational forum “New cadres – for the new economy”, during which more than 130 bilateral agreements on cooperation and implementation of joint projects were signed. The transition to an important stage in the development of bilateral interstate cooperation, according to the rector of Moscow State University, marked the signing of the Agreement on Mutual Recognition of Education and Qualification in the framework of a meeting of the Joint Commission in May 2019 of the two states degrees of Russia and Uzbekistan. The document allows graduates of universities of our countries to continue their studies and carry out professional activities in any of them.

Since the First Russian-Uzbek Educational Forum, universities have jointly developed 63 cooperation roadmaps. The scientific and educational interaction between Russia and Uzbekistan now includes more than 115 partner universities, more than 240 cooperation agreements between universities. The geography of university interaction affects almost every region of both countries. One of the most important forms of partnership of educational systems, V.A.Sadovnichy called the functioning of branches of Russian universities in Uzbekistan, which play a significant role in the integrated development of the country’s higher education system. Today there are 10 branches, and 7 of them have been opened over the past 2 years. In the near future it is planned to open another 6. And the first branch of a Russian university in Uzbekistan was the branch of Moscow State University named after MV Lomonosov, opened in Tashkent in 2006. V.A.Sadovnichy stopped at his work in more detail. Currently, 442 people are studying in it, and over the 14 years of its existence, the branch has graduated more than 600 specialists. It opens new joint master’s programs with Uzbek universities, the branch is developing.

One of the new forms of interaction between the universities of Russia and Uzbekistan are joint research and educational centers and faculties. In 2018, Moscow University opened the Lomonosov-Ulugbek Research and Education Center on the basis of the Mirzo Ulugbek National University of Uzbekistan, within the framework of which joint projects in the field of education and science are implemented. In particular, as part of the work of this center, Moscow State University plans to open a joint preparatory department this year for applicants from Uzbekistan to Moscow State University and other Russian universities, as well as to implement a project aimed at developing an Integrated Environmental Monitoring System for the Aral Sea region.

In 2020, Russian universities plan to open several faculties on the basis of partner universities in Uzbekistan. The President of the RSR noted a significant increase in academic exchange and joint educational projects in Russia and Uzbekistan, including in the field of additional postgraduate education.

An important part of the interaction of the two countries V.A. Sadovnichy called the implementation of joint research projects. Over the past 10 years, more than 2,000 joint works have been published, with a steady increase in publication activity from year to year. Most of the publications are devoted to nuclear physics, astronomy, mathematics, material sciences, ecology, chemistry, history, a significant proportion of which are published in Russian.
A number of Russian universities are implementing projects aimed at bringing our cultures closer together. Platforms for a “dialogue of cultures” are being created, cultural and educational projects, lecture courses, seminars and master classes on the history and culture of Russia and Uzbekistan are being held. Much attention is paid to preserving the common historical and cultural heritage.

In the year of the 75th anniversary of the Victory in the Great Patriotic War V.A. Sadovnichy could not help but recall the assistance of Uzbekistan to Russian educational and scientific institutions, many of which were evacuated on Uzbek lands.

At the end of his report, the rector of Moscow State University noted the work of the Eurasian Association of Universities, which plays a key role in international cooperation and has 30 years of creative work, 14 congresses, dozens of implemented projects and joint initiatives.

W.P. Umurzakov devoted a significant part of his report to the concept and roadmap for the development of higher education in the Republic of Uzbekistan until 2030, the implementation of which, in his opinion, can not do without Russian colleagues. The opening of new universities and branches of Russian universities, the application of experience in the use of distance technologies in the educational process, the improvement of the material and technical base of universities and branches, the development of joint faculties, departments and schools, the expansion of double diploma programs – all this and much more are included in the tasks of the leadership of Uzbekistan and Republican universities in order to improve the system of higher education in the country. W.P. Umurzakov also shared his experience in organizing the learning process in a pandemic, which was received with interest by the Russian participants in the conference.

The rector of the Moscow State Institute of International Relations (University) of the Ministry of Foreign Affairs of Russia, Academician A.V. Torkunov. He paid special attention to the study of the Russian language in the republic. First Deputy Minister of Energy of the Republic of Uzbekistan, Chairman of Uzkimyosanoat JSC Zh.T. Mirzamakhmudov, who has recently been the executive director of the branch of the Russian Chemistry Technical University named after D.I. Mendeleev in Tashkent, focused on the fact that the creation and development of branches of Russian universities is supported at the state level, which provides them not only with a material basis, but also gives confidence to graduates in future employment. He also told his Russian colleagues about measures

Concluding the plenary session, V.A. Sadovnichy noted the closeness of the peoples of Russia and Uzbekistan, who are familiar with each other, are ready to work together for the benefit of the development of higher education of the two countries, and also expressed hope that the dialogue launched in online mode will undoubtedly continue in full-time format.

On the 45th anniversary of the presentation of D. Ikeda the diploma of Honorary Doctor of Moscow University