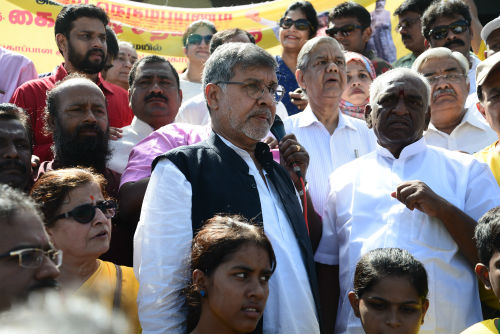 Why are you doing the Bharat Yatra?

Bharat Yatra is my war to end all forms of abuse. Child rape and sexual abuse have become a moral epidemic that haunts our nation. We can no longer remain silent spectators. Our silence is breeding more violence. That is why the Bharat Yatra is the beginning of an all-out war on rape, abuse and trafficking. We at this moment, declare that we refuse to let victims and their families live in fear while the rapists roam free and fearless. I refuse to accept that eight children go missing and two are raped every hour. If a single child is in danger, India is in danger. Bharat Yatra is to make India safe again for our children. Make no mistake: this will be a decisive war; a war to reclaim the morality of the Indian soul.”

Tell us about Bharat Yatra.

The Bharat Yatra is a pan-India movement to raise mass awareness about the growing menace of child sexual abuse and child trafficking. It will cover 22 states and union territories, spanning 11,000kms. Moreover, will fight for the cause of millions of children, for their safety, security and freedom. o The Bharat Yatra will be organised between September to October 2017, from Kanyakumari to Delhi with smaller yatras culminating in Delhi from all other zones of the country. Through the Yatra, the aim is to ensure that the topic of child sexual abuse and assault becomes a subject of conversation in every household, at every level. It aims to create a conversation so powerful that it will force stakeholders and visionaries across the country to relook and re-work the methods of prevention of violence against children and the redressal available to them.

When and how did the idea trigger you?

I have advocated for the safety and security of the children across the world, for over 35 years and have launched marches that have led to the inclusion of education as a fundamental right and the ratification of the ILO.

The Bharat Yatra conceptualised on the theme of Surakshit Bachpan- Surakshit Bharat (Safe Childhood- Safe India) is the movement of the 21st century which will combat the evils of all forms of violence against children.

I will not let the parents of these children live in pain, helplessness, trauma and shame for the rest of their lives. Children are the future of India, and there should be no place for child rapists in the country.

What is the whole motive of Bharat Yatra?

It is critical to make the public aware of the extent and seriousness of the crimes of trafficking and sexual abuse. Public mobilisation and mass awareness creation help in bringing this issue to the centre stage for social awakening and action. The Yatra will look to change the mindset of the people and sensitise them to the most urgent and pressing issue of child sexual abuse and child trafficking. How this abuse is, in fact, organised crime.

It will become the ‘voice’ of the children, unable to speak up and fight for their dignity. By exploiting children through labour, sex and torture, people only lay the foundation for social, political and economic destruction of our country. o This march pushes for the specificity that a bill tabled in the parliament will provide. If passed, the bill will finally define the ambiguity surrounding the action necessary to be taken in cases of child trafficking.

How many participants are you expecting in this yatra?

As this Yatra will look to involve the people in this country to fight for their future, people from all walks of life will join us. By the end of this Yatra, we aim to have at least 1 crore Indians join us and take a pledge to fight against child sexual abuse and trafficking. My foundation and I have been in talks with several faith leaders, parliamentarians, corporates etc. all of whom have wholeheartedly declared support for the Yatra and have promised that their supporters and employees would also join us to Make India Safe Again for our children