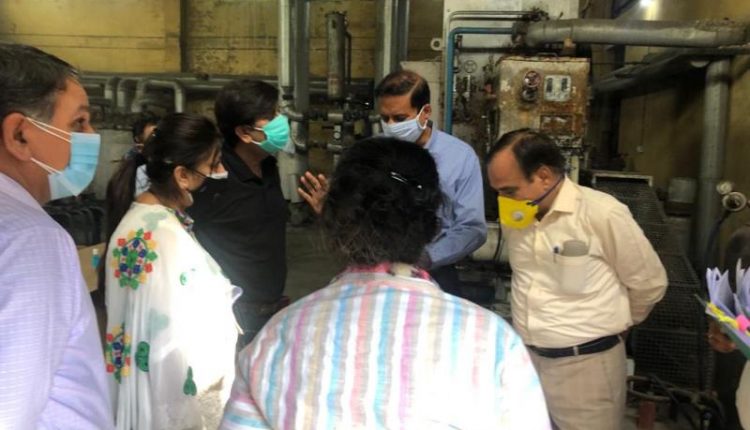 By India Education Diary Bureau Admin On May 16, 2021
Share

Jammu: Rising to the occasion in the wake of the obtaining grim pandemic times, the War Room set up by the Department of Industries and Commerce, has facilitated the supply of 38,299 oxygen cylinders to Government Medical Colleges and its Associated Hospitals, far off healthcare centers and some private health institutions across the Jammu region in 14 days from 2nd to 15th of May, 2021.

Government Medical College Hospital Jammu alone has been supplied 15052 cylinders in view of core rush in this premier health institution.

Department of Industries and Commerce, under the guidance of Principal Secretary, Industries and Commerce, Ranjan Thakur, and Director, Industries and Commerce, Anoo Malhotra, has taken the charge of oxygen supply to the health institutions on a war-footing basis, keeping in view the spike in COVID cases. This was an uncharted territory and the full team of the Industries department rose to the occasion. Field staff was put in all the oxygen units to monitor the supply chains 24X7 and the Functional and Project Managers have been regulating the distribution of cylinders. The demand has been soaring and the lives of patients are at stake. A single error could bring the catastrophe. All the focus was on to stop the panic from engulfing the common masses.

Recognizing the sensitivity of the situation, emerging out of this horrendous second wave and the dying need of oxygen supply, the government carried out marathon meetings in the first week of April to explore way out how to use the most scarce resource viz Oxygen. Immediately teams were created with a mandate that all the oxygen plants shall run on full capacity and there should be no diversion of Oxygen Cylinders for Non-Medical purpose i.e. full oxygen be stocked for Medical purpose only. The commercial non-medical oxygen cylinders be customized/converted for use as medical oxygen cylinders after proper treatment for further supply to healthcare institutes and the report in this regard be obtained. All the oxygen cylinders shall be filled to its full capacity and no cylinder should be kept empty except for stocking. Besides, the capacity of all the oxygen manufacturing units was reassessed and they were directed to operate 24*7.

Over 70 million doses of COVID-19 vaccine administered in UK

Director Anoo Malhotra was managing all this with all her administrative skills which she has acquired was put in use to the most important work of her carrier. The beds in the institutions were increasing so the demand for oxygen. The oxygen cylinders carrying vehicles were crisscrossing the UT of JK with multiple trips. As the Oxygen manufacturing units are located at Jammu, Kathua and Udhampur soon the roads vehicles ferrying the oxygen cylinder was the most common sight on the roads. WhatsApp groups of oxygen monitoring were buzzing like anything and the demands from all the medical institutions were coming at the same time. It has to be monitored; some 3000 oxygen cylinders are to be distributed among 60 medical institutions with Government Medical College Jammu consuming 1500 cylinders alone with the highest patient load. Director steered the team through the chaotic times and till date oxygen supply has sustained.

To provide the Oxygen to the patients in the home the WAR room was created at Jawaharlal Nehru Udyog Bhawan Jammu, WAR ROOM, the name goes very well with the setup established to deal with catastrophic pandemic which has emerged like a deadly war. It is working round the clock (24 x 7 ) to cater to the demand of oxygen cylinders for the distressed attendants of the patients who are on war against Corona virus. Team of 6-8 employees of I&C Department, per shift, sit around the round conference table of the aptly named ‘Oxygen War Room’. As soon as the bell rings, the urge to help out an unknown face, a grieving voice runs among the staff members. All the relevant information about the patients is gathered, authenticated and the frontline warriors set out to ameliorate the sufferings of some one’s ailing friend or a family member. The point here to note is that War Room , despite its name , is a place full of manpower filled with much empathy and dedication towards their destined role in saving much precious lives. To them , this is not their job, but a service to the humanity.

The massive exercise reminds about the Charles Dicken’s opening paragraph of ‘The Tale of Two Cities’ appears to be replaying itself in April 2021 right here in the Union Territory of Jammu and Kashmir as second wave of COVID-19 pandemic abruptly appears and the thoughts about the times have been crisscrossing the human mind depending upon where one is trapped in the tornado.

The nation was just emerging and the people were readjusting the post lockdown times unknown of the coming situation when the most important thing will be the oxygen. None could imagine that medical oxygen cylinders will be the most sought thing along with flow meters, oxymeters, oxygen concentrators.

Over 70 million doses of COVID-19 vaccine administered in UK