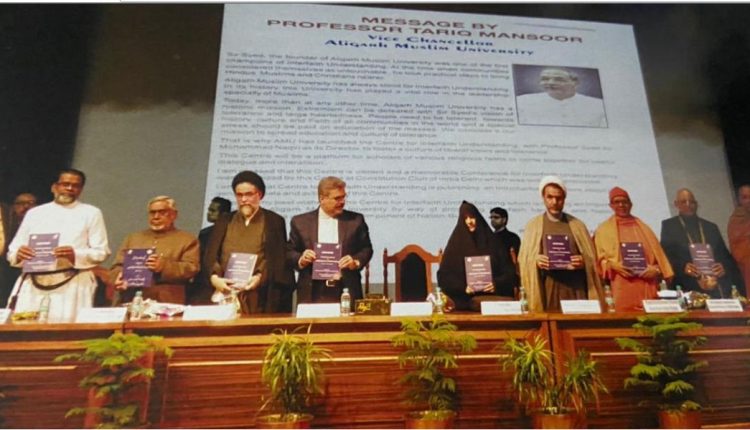 Aligarh : In line with age-old literary and academic relations with India and especially with the Aligarh Muslim university, the newly elected President of Iran Ayatollah Ebrahim Raisi, has a direct link with the Aligarh Muslim as his wife Dr Jamileh Alamul Huda was the guest of honour and main speaker of the International Seminar organised by AMU’s Dara Shikosh Centre for Interfaith Understanding and Dialogue on February 13, 2019. His daughter too attended the seminar.

“It is a matter of pleasure and honour for AMU as a bridge of India’s relations with the Middle East, as PM Narendra Modi said in his historic address on the occasion of AMU Centenary Celebrations, hosted the wife of the President-elect Raisi, Dr Jamileh Alamul Huda, a distinguished scholar in her own right, as the guest of honour in an International Seminar”, said AMU Vice Chancellor Professor Tariq Mansoor.

Prof Ali Mohammad Naqvi, Director, Sir Syed Academy, and Dara Shikoh Centre for Interfaith Understanding and Dialogue, AMU, said: in the international seminar on the topic of ‘Importance of family in world religions’ Dr Jamileh Alamul Huda, was the guest of honour and the main speaker. In her address at the inaugural session, apart from the importance of family in Islam and Indian religions, she spoke on the ancient ties of Iran and India and importance of Aligarh Muslim University and its high reputation in Iran.

Dr Alamul Huda presided over a session of the Seminar, in which Dr Ms Sadat, the daughter of the President-elect Raisi presented a scholarly paper that was much appreciated by AMU scholars, informed Prof Naqvi.