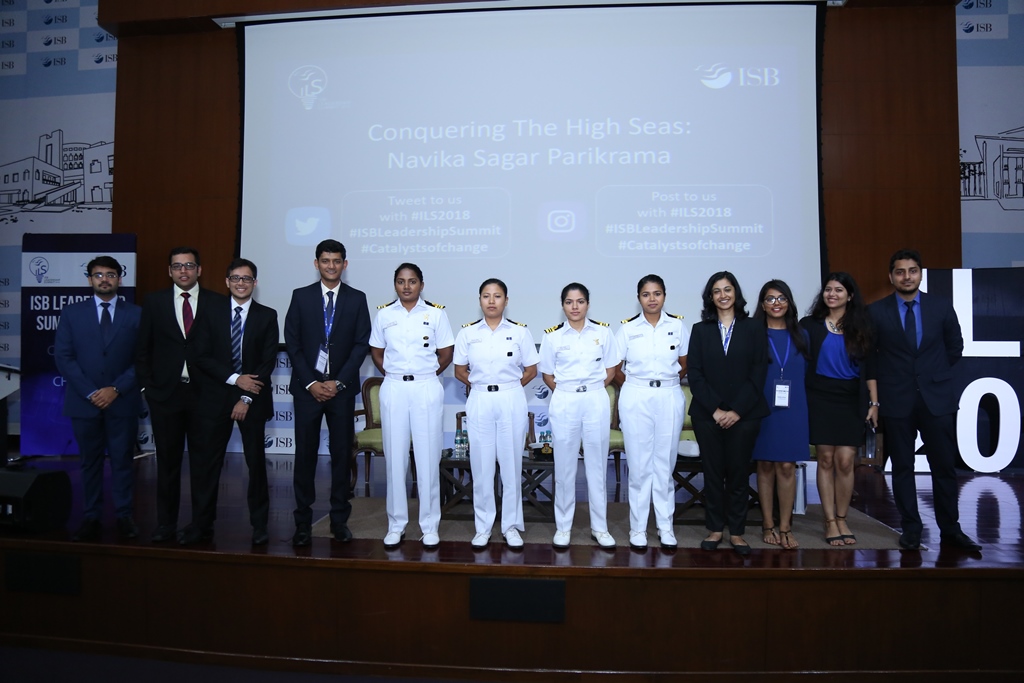 Mohali: The 16th edition of the ISB Leadership Summit (ILS) at the Indian School of Business (ISB) concluded on a high note today at its Mohali campus. The two day summit hosted over 500 participants and 30 eminent leaders, including 13 women from different domains of business, academia, sports, public policy, entertainment and politics. Some of the eminent leaders that took part in this two day summit were:

The theme for this year’s summit was ‘Catalysts of Change.’ The summit focused on factors that have driven change in the past, drive change today and will continue to drive change in the future. This year, ILS aspired to holistically explore emerging trends, breakthrough ideas and strong leadership that fosters a spirit of constant change. The discussions at the summit touched upon how one can continue to remain vigilant and continue to exercise leadership in a world that is always on the cusp of the next disruption.

The event started with an inaugural speech and lighting of the lamp by Dean ISB, Rajendra Srivastava. During the opening address, Dean Srivastava said,” You have to learn from the future; you should have the courage to do things differently even if it’s at the cost of your comfort zone. In today’s world, you have to learn to collaborate, to share if you want to be a successful leader and work towards change. Today’s it’s not about just doing the right things but also doing them correctly. As a leader, you inspire people by what you do. Asking the students to challenge the rules that make no sense today, Dean Srivastava said, “For you to create the change, you have to be the change.”

Nandu Nandkishore, former global CEO, Nestle Nutrition spoke about how leaders should prepare their organizations for a change in his keynote address on ‘Strategizing success and Unleashing your potential.’ He highlighted that the driving force for India’s development is the entire entrepreneurial force of the country.

Mr. Navjot Singh Sidhu Hon’ble Minister of Tourism and Cultural Affairs and Local Government, Government of Punjab, captivated the audience in the post-lunch session. He weaved the magic through his real-life experiences that made him what he is today. In his best colloquial way, he told the audience that how his experience enables him to deal with adverse circumstances of life.

He said “it’s not just the goal in life which is important, what matters most is the means that you take to reach that goal. Champions think differently and approach fear differently. Conquering your fear is your greatest asset, and a champion does that. Positive anything is always better than negative nothing”.

.He further told the audience that it’s the thinking that matters. “Our thoughts are the real interpreters of our action. Most of our successes are built on our failures so don’t be afraid of the failures. Challenge your failures; convert your weakness into your strengths. It’s not the passion that builds you it’s the adversity. Adversity is your greatest teacher. Great champions like Kapil Dev, Sehwag, and Tendulkar all faced the most adverse scenarios with confidence and without fear”.

His key note was followed by a session on Economic Sustainability through Ecological stability by Dr. Sultan Ahmed Ismail, Director, Ecoscience Research Foundation. He discussed the concrete step that needs to be taken to achieve sustainable ecological practices for agriculture, solid waste management, and environmental awareness.

Next in the line was the most awaited all women panel titled “Breaking Through the Glass Ceiling” was moderated by Deeptha Vivekanand, Storyteller, Ever After.

The panel started with an exciting story about a woman who could transform herself into a leopard, symbolizing her courage and power to be what she wants to be. There were insightful discussions regarding gender stereotyping, shape-shifting, section 377 and what could be done to the attitude of people. It is not so much of a glass ceiling that needs to be broken, rather a Sticky-Floor that we should avoid.

The closing keynote speaker on day one was Actor, Director and Social Activist, Rahul Bose who spoke about the difference between being the change and being the catalyst of change. He elaborated many examples of driving the change through his films, NGOs and his career in Rugby. He left all with a very basic but difficult question, “Who I am and what do I want to change?”

Day second of the summit saw a powerful presentation by the first Indian all-women crew to successfully attempt the circumnavigation of the globe, the INSV Tarini. The crew spoke about their inspiring and adventurous journey of 254 days where they battled at sea against the forces of nature and how they came out trumps, covering a distance of 25000 NM and surviving hurricane force winds.
The concluding session of the day touched upon the most relevant topics of the times ‘In search of New Horizons: Catalyzing Change in Indo Pak –Ties .Moderated by the senior journalist Nirupama Subramanian the panel had Lt. Gen Deependra Singh Hooda (Retd), Lt. Gen Kamal Dawar(Retd) and Ravinder Kumar Kaushik . The group discussed about what can be done to make the relationship between India and Pakistan better and why it has not been done so far. Another important point that was of concern during this discussion was what impact would the recent sworn in of Imran Khan as the prime minister of Pakistan would have on this relationship.