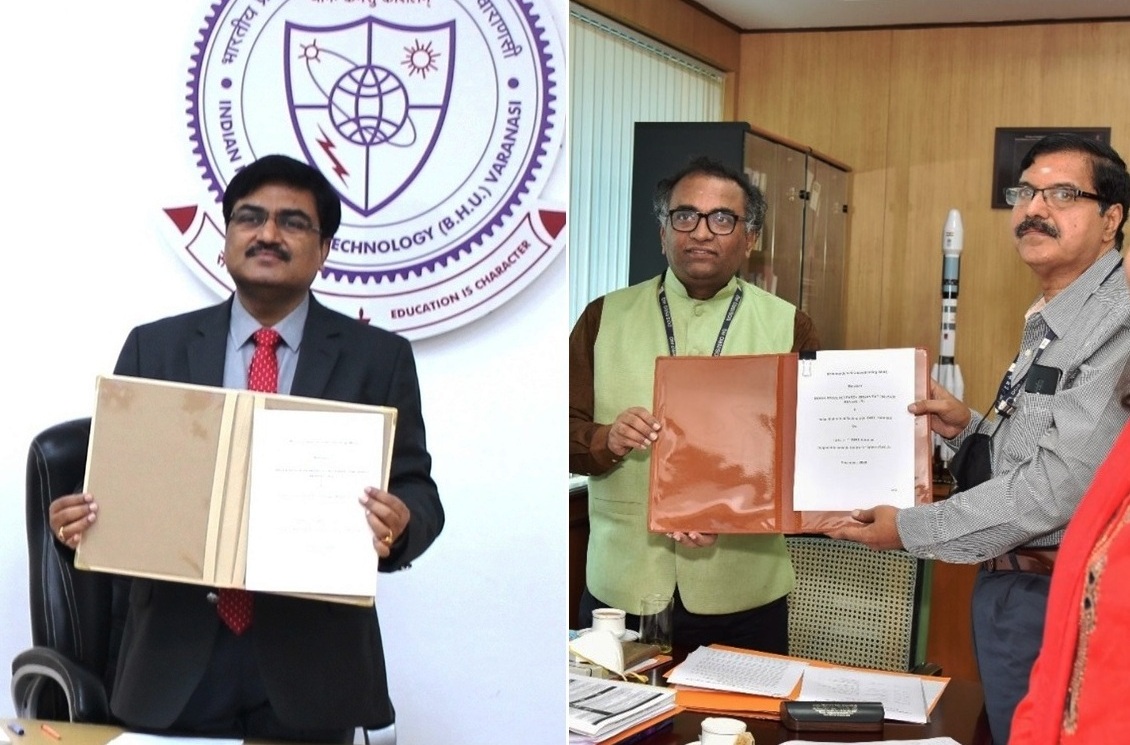 Varanasi: A memorandum of understanding (MoU) was signed between the Indian Institute of Technology (BHU) Varanasi and the Indian Space Research Organization (ISRO) on Wednesday (23.12.2020) to pave the way for advanced research in the future technology of the Indian space program. Under this agreement ISRO-IIT (BHU) will open the Regional Academic Center for Space (RAC-S) in the Institute. The MoU was signed by Prof. Pramod Kumar Jain, Director, IIT(BHU) on behalf of the Institute and Dr. P.V. Venkatakrishnan, Director, CBPO, ISRO HQ on behalf of ISRO virtually on Wednesday. On this occasion, the inaugural address was given by the Scientific Secretary of ISRO, Shri R. Umamaheswaran. The guests were welcomed by Professor SB Dwivedi, Dean, Academic Affairs and a vote of thanks was given by Dr. Anurag Ohri. Professor Rajeev Prakash, Dean, Research and Development, Professor Rajnesh Tyagi, Dean, Faculty Affairs and Professor PKS Dixit, Head of Department, Civil Engineering were present on the occasion.

In his briefing, Director of the Institute Professor Pramod Kumar Jain said that the Regional Academic Center for Space (RAC-S) of ISRO will act as a major facilitator for promoting space technology activities in the states of Uttar Pradesh, Madhya Pradesh, Chhattisgarh. He also said that IIT (BHU) Varanasi will act as a catalyst for capacity building, awareness creation and R & D activities of ISRO. The activities of RAC-S shall be directed to maximize the utilization of research potential, infrastructure, expertise available at ISRO and IIT(BHU) Varanasi.

IIT (BHU) Varanasi will be the leader and project monitor of RAC-S in which Institutes of Excellence in the field of science and technology in the states of Uttar Pradesh, Madhya Pradesh and Chhattisgarh will be roped into participate in various research and development activities. IIT(BHU) Varanasi will identify the Regional Coordinator of RAC-S who will be responsible for the overall management of the centre.

Director Professor Pramod Kumar Jain further said that with the help of the RAC-S at IIT (BHU) Varanasi will leverage research in space science and space technology, space application, agriculture, telecommunications, meteorology, water resources to design developmental models for effective natural resource management. He iterated that such an initiative will greatly benefit the Purvanchal and Central regions of the country.

B-Tech, M-Tech and research students to benefit from RAC-S

The Centre will facilitate short- & long-term projects to propel the culture of research and development. Short-term projects for B-Tech and M-Tech students from the institute and associate institutes will also be included in this sequence. Long term R&D projects leading to the Ph.D. Programme will also be offered. Capacity building programmes like conferences, exhibitions and short courses will also be organized to strengthen the knowledge base in the field.