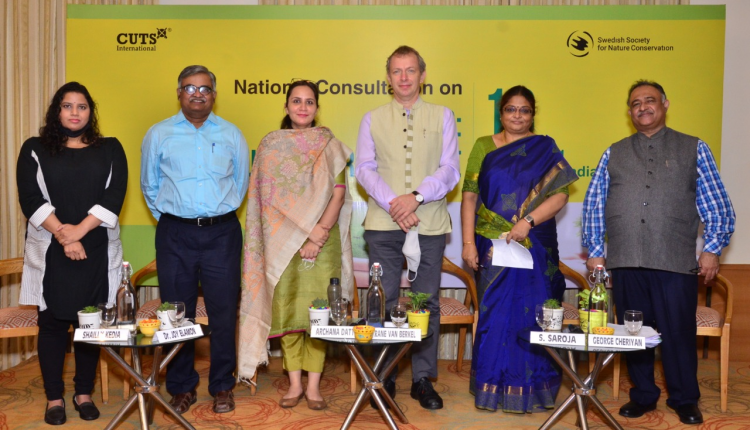 New Delhi: Five years into the implementation of Sustainable Development Goals (SDGs), the assessment of the progress in India shows, it is very unlikely that India will achieve any of the targets of SDG12, which is Responsible Consumption and Production. In addition, the status of many of the Indicators may further worsen by 2030, comparing with 2015, due to the negative impact of the Pandemic and various other reasons.

Myntra doubles down on its customer commitment to the Beauty…

Lack of awareness, lack of coordination and lack of data are a major concern. Whatever sustainable activities various states implement, many of those achievements go unnoticed and are not reported mostly because of the lack of awareness among the concerned officials, except couple of them involved in SDG reporting, about SDG and its importance. Most officials across various departments were not able to recognise what an SDG is. This lack of awareness among government officials coupled with lack of funding, shortage of technical staff resulting in inadequate monitoring and reporting appears to be the most significant challenges at the state level in SDG implementation. If left unaddressed, this could give a wrong image of the nation’s merits and efforts towards sustainable consumption and production.

This was one of the major finding of study done by CUTS International on SDFG 12 titled “Sustainable Consumption and Production – A Consumer Perspective”. The study mainly looked at SDG 12 from a consumer perspective based on The United Nations Guidelines for Consumer Protection (UNGCP). The importance of studying and analysing the achievement of a country’s progress under SDG 12 than any other Goal was felt because of its interlinking nature with other goals. Almost all other Goals are connected with SDG 12, thereby underlining that any progress to meet Agenda 2030 by a country cannot be achieved without carefully approaching and addressing the concerns under SDG 12.

In India, SCP that was slowly gaining acceptance among the stakeholders has been almost ignored under the corona virus spread. Recession, loss of job and physical distancing largely affected the way people produce and consume. Nothing remains the same as prior to the pandemic, people’s needs and wants changing drastically.

The key findings of this study by CUTS on SDG 12 were discussed and deliberated in the National Consultation organised by CUTS International in partnership with the Swedish Society for Nature Conservation (SSNC) at New Delhi on March 18.

Speaking during the inaugural session Rene Van Berkel, UNIDO Representative, Regional Office in India said “SDGs are very much interconnected, in fact SGDs are like a dice with seventeen sides, we cannot move on any side without moving the other ones, so one cannot just pick out anyone goal without any action on others.”

George Cheriyan, Director, CUTS International in the opening address expressed concern about how neglected SDG 12 is when compared to all other goals. He claimed that SDG 12 is an orphan goal, as the goal itself is a mixed bag with many of its targets outside the control of the Ministry of Environment. For instance, sustainable tourism is responsibility of Ministry of Tourism; Sustainable Public Procurement if implemented would become the responsibility of Ministry of Finance. Various ministries responsible for various targets which is not the case with other goals.”

Archana Datta, SWITCH-Asia RPAC Coordinator for India, UNEP while referring to the finding of CUTS study that there is an absence of effective monitoring and data collection framework for SDG 12, shared that efforts are being currently taken under SWITCH Asia Program to address this concern. She concluded by saying that while science and knowledge required for implementing 2030 Agenda is already well advance, all what is needed is a creative will and country should use the pandemic crisis to encourage greater action, collaboration and knowledge sharing among stakeholders for larger public good.

In parallel to the findings of the study, the consultation underlined the need for the centre in taking lead in adopting a green public procurement policy to send a strong message to the business community and create a strong thrust to expedite the not-so-active national ecolabel ‘Ecomark’.

In fact the Prime Minister too had spoken in recent past that country need to promote Ecomark out of waste utilisation products. However, to make such things materialise an independent agency should be created to handle Ecomark. Small and medium-sized enterprises in particular, stand to benefit since they are often at the forefront of innovation in developing and marketing environmentally friendly products.

A need for inter-departmental coordination committee to strengthen waste management system at state level was also felt strongly. From a consumer perspective, while schemes like Swatch Bharat Mission did create mass awareness about cleanliness and hygiene, it could not create any rippling effect to rise public’s awareness about issues like waste segregation, recycling and product life-cycle.

Apart from sharing best practices from the project states the one day consultation deliberated on various other topics like food loss, sustainable tourism, natural resource efficiency and many more. Before concluding, the participants underlined the urgency to consider passing the long pending Draft Natural Resource Efficiency policy and the need to have regulations like ‘Guest Control Order, 1960s’ to prevent wastage of food at weddings & social gatherings. States already having such restrictions on guests to tackle the pandemic have seen success in not only addressing the concerns related to pandemic but also in addressing food wastage during such celebrations.

India’s step for the achievement of SDGs means a lot to the world, as the country has the second largest population in the world. Therefore, India must develop effective methods for implementing, monitoring, and measuring SDGs’ progress. Learning, sharing and networking should be actively promoted among like-minded stakeholders across the country and beyond.

The consultation, that followed strict COVID protocol guidelines, happened in three separate sessions, saw participation from various government departments, organisations working on sustainable consumption and consumer protection from Delhi and other states including Chhattisgarh, Himachal Pradesh, Kerala, Rajasthan, Tamil Nadu and Uttar Pradesh. The study would be finalized by CUTS based on the feedback received during the consultation and would be widely disseminated among the stakeholders.