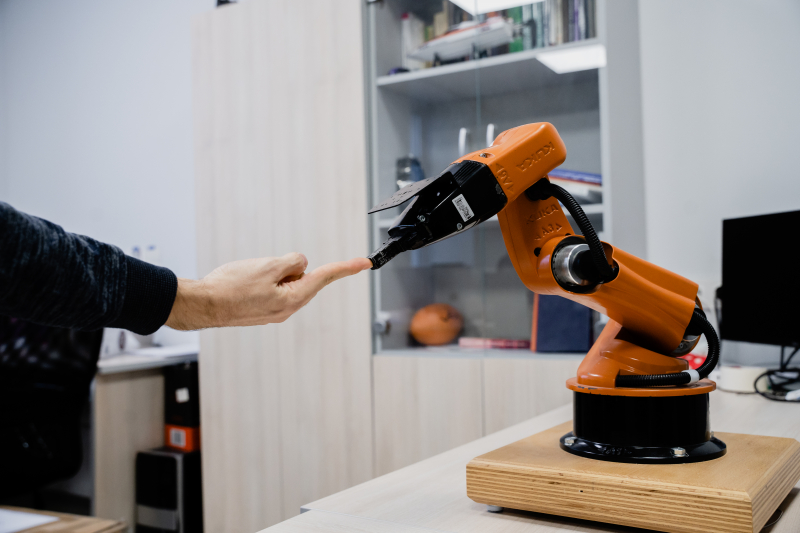 KUKA youBot is a small tabletop robot produced by the German company KUKA Roboter. It gave start to a project for the creation of a new sensorless algorithm that is now in development at the International Laboratory of Geometrical Methods in Control and Application.

Typically, the code used by standard industrial robots is unavailable to third-party developers for security reasons. KUKA’s code, however, is open-access. Since it’s low-powered and thus can’t harm a human being, it’s very useful for research and testing of new control algorithms, as well as for teaching students to work with real equipment.

Initially, the robot could only move from point A to point B. Then, the laboratory staff developed a trajectory planning program to allow it to move in space at a certain speed. But most importantly, KUKA is the first robot at the lab that uses an algorithm for sensorless force control: it measures its interactions with its environment through indirect indicators – particularly the electric current sensors that are a part of any robot’s engine.

The software developed for KUKA by the specialists from ITMO University can be easily used and scaled up for large manipulator robots, as its mathematical model is described in general terms. This allows for implementing force control algorithms at the program level into robots that weren’t initially designed for that purpose.

The developed software helps robots solve more tasks: for example, they can control the strength of their interaction with fragile objects. It’s also safer: conventional robots can’t perceive whether there’s a person nearby and therefore can hurt them. To detect humans, they’d need to be modified with additional adapters. Sensorless algorithms, however, eliminate the need for extra modifications, which helps end users in the industry save a significant amount of money.

Right now, the researchers are testing systems for computer vision and object detection so that the robot would be able to not only interact with nearby objects, but also determine what they are, as well as evaluate and categorize them.

PFIZER: US FDA ACCEPTS REGULATORY SUBMISSION FROM PFIZER AND OPKO FOR REVIEW OF SOMATROGON

Cooperation is key to success in microbial communities

University of Bristol: World-first facility will change the way we design and…