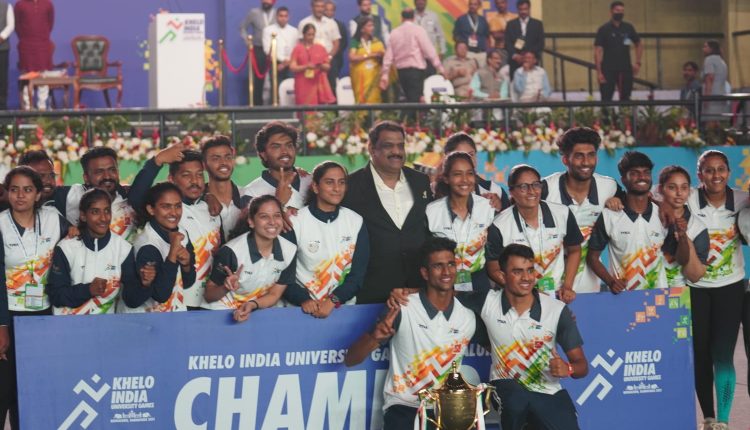 Bengaluru : A magnificent closing ceremony took place at Sree Kanteerava stadium in Bengaluru to conclude the second edition of the Khelo India University Games (KIUG) 2021, the biggest ever sporting event in India hosted by JAIN (Deemed-to-be-University). JAIN (Deemed-to-be-University) won the championship with 32 medals, including 20 gold, 7 silver, and 5 bronze. Lovely Professional University (LPU) was ranked second with 17 gold medals, followed by Punjab University with 15 gold medals. The 10 day-long event brought together 3800 athletes from 208 universities. A total of 259 gold medals were awarded to the athletes and 76 KIUG records were broken at KIUG 2021.

Hon’ble Union Home Minister, Shri Amit Shah said, “Our government has prepared a roadmap for upcoming 25 years for the development of sports in India with the goal of bringing India within top 5 in Olympic events.  Under this road map, transparency in selection of talented players from events like Khelo India University Games, their proper training, work on sports infrastructures, etc. are included.  Along with this, our government has started many schemes to promote Indian sports.  I would like to thank the Government of Karnataka as well as the host JAIN (Deemed-to-be- University) wholeheartedly as they have contributed a lot in making this grand event a huge success.  I heartily congratulate Dr. Chenraj Roychand on his university teams winning the trophy.  I have also apprised Dr. Roychand about the kind of facilities at the world’s largest stadium, Narendra Modi Stadium which has the facility to organize 80 sports.  I also urged him to tie-up with us so that their players can get maximum encouragement”.

The trophy was handed over to the winning team by Shri Amit Shah. Speaking on winning the trophy, Dr. Chenraj Roychand, founder of JAIN Group and Chancellor of JAIN (Deemed-to-be-University) said, “We are overwhelmed to receive the KIUG 2021 champion’s trophy from the Hon’ble home minister Shri. Amit Shah ji. It is a moment of celebration at JAIN (Deemed-to-be-University) and I congratulate the team for their outstanding performance and for making JAIN (Deemed-to-be-University) proud. I also would like to share my sincere gratitude to each and every member who tirelessly worked towards the smooth execution of the responsibilities as the host of KIUG 2021. This win has also reiterated our commitment towards inculcating sports culture in our students and creating sport environment”.

Priya Mohan of the host university won two the gold medals in the women’s 200m race finale and in the women’s 400m race. JAIN’s seven-man karate team performed well with Sayed Baba winning the gold at the singles event. Both the men’s and women’s Badminton teams of JAIN (Deemed-to-be-University) won gold and the hearts of the spectators with their determined performances. Fencing, Women’s Pole Vault and weightlifting teams registered extraordinary performances and fetched medals for the University.

Dignitaries from state and central governments have been applauding the host University for the high-standard of hospitality, best-in-class hostel accommodation, the finest catering services, as well as a variety of other arrangements made for the athletes at the JAIN Global Campus.

University of Exeter: Internet use during pandemic linked to increased mental health risks for young and middle-aged men