Jaipur BookMark unveils a rich programme for its 2021 virtual edition

Jaipur: The ‘greatest literary show on Earth’ is all set to return with its 14th edition virtually from 19th – 28th February 2021, with the coming together of the world’s greatest writers, thinkers, humanitarians, politicians, business leaders and entertainers on one stage. This year, a time of many firsts, the Covid-19 pandemic has shifted paradigms of engagement to the virtual world, and the Jaipur Literature Festival as well as Jaipur BookMark (JBM) too will feature an online programming spread.

Jaipur BookMark (JBM) is traditionally held parallel to the Jaipur Literature Festival every year. It is a distinctive B2B platform and brings together publishers, literary agents, translation agencies and writers wanting to talk the business of books, along with focussed sessions and major industry players from across the world. For its 8th edition. JBM will present an impactful online programme from 22nd to 25th February, 2021.

One of the most insightful publishing conclaves in South Asia, JBM 2021 will explore varied topics which deal with the publishing industry. Indian language publishing’s forays into the digital idiom face infrastructure constraints, tech challenges and bandwidth issues. Yet, content is finding multifaceted dimensions and new avenues for sale across a vast and multilingual market. How sustainable are these online avatars? What are the revenue models? Publishing pundits from across India, like Arunava Sinha, Esha Chatterjee, Giriraj Kiradoo, Kannan Sundaram, Priya Kapoor, Ravi Deecee and Aditi Maheshwari Goyal will come together to discuss the challenges and innovative responses that have found shape in the course of a disruptive and transitional year.

Feminists and independent publishers have been harbingers of innovation and change, especially in the way knowledge is understood, produced and shared – a welcome reality when compared to decades ago, when the world’s publishing space was dominated solely by men. But will independent voices continue to hold their own? Will they always remain lone voices? Or will they otherwise have to merge with the large conglomerates? A path-breaking panel of publishers including Margaret Busby, Lennie Goodings, Colleen Higgs, Susan Hawthorne and Urvashi Butalia will discuss their struggles and inspirations, focussing on the myriad vantage points that feminists, gender-diverse and independent publishers bring to our world.

The 21st century has seen the birth of a new kind of entertainment: hyper-personalised, private and powered by the Internet. Digital content has captured the Zeitgeist of our times as well as the collective attention of India, which streams it on mobile devices, computers and smart TVs. Unlike traditional movies and TV shows, digital content, aired on OTT platforms, shuffle chronologies, weave in multiple subplots and house stories that couldn’t earlier be accommodated on the big screen. Celebrated film producer and director Shekhar Kapur and author Vani Tripathi Tikoo will discuss the impact of technology on the rise of non-linear storytelling.

Publisher Naveen Kishore will speak to author Léonora Miano and Indian scholar & literary theorist Gayatri Chakravorty Spivak about upsetting the status quo in the territorial breakup across the established publishing borders. The politics of location has dictated that publishers in India can only buy the rights to publish books in their own country and region. Reversing this long-held notion, Naveen Kishore’s publishing company, Seagull Books, has in the last 15 years, acquired some 600 international titles and their world rights. Recently, they have announced a new series titled ‘Quilombola!’, edited by Léonora Miano, where original language rights for the French title are being sold to the French. In a scintillating conversation, Gayatri Spivak, University Professor in the Humanities, Columbia University, Léonora Miano, celebrated Cameroonian writer, and Naveen Kishore, Director and Managing Director, Seagull Books, discuss the location, language, and free-floating life of ideas and narratives.

H.E. Hans Jacob Frydenlund, Norwegian Ambassador to India said, “When Norway started supporting the Jaipur Bookmark initiative eight years ago, our aim was to present a small language to a big world. That aim remains firm and has been strengthened even further in this unprecedented year- the year of the pandemic. We are truly impressed with Teamwork Arts persistent pursuit of continuing its festivals digitally, and thank them for continuing their efforts in bringing the best of world literature to its audience. I wish the festival all the best.”

H.E. Ugo Astuto, Ambassador of the European Union to India and Bhutan said, “I am delighted that the European Union, as a Festival Partner at this year’s Jaipur Literature Festival, will offer an extensive B2B segment at the Jaipur Bookmark. Writers, publishers, and literary agents from across Europe will present the wealth of our literary heritage and offer insights into all aspects of the European book market. This partnership is an extension of our literary exchanges with Indian counterparts and will provide new avenues for inter-cultural and artistic dialogue.”

Author, JBM advisor and Co-Director, Jaipur Literature Festival, Namita Gokhale, said, “Jaipur BookMark 2021 returns in a virtual edition that will reach out to all those who cherish and engage with the business of books and ideas. We believe in books and their transformative role in guiding individuals and society forward. We have crafted a series of sessions that bring in speakers from around the world to share their learnings and their inspirations as the publishing industry steps into a new chapter in terms of technology and content orientation.”

Publisher and JBM advisor Urvashi Butalia said, “Jaipur BookMark, returns this year with a new and exciting lineup of international and Indian speakers in conversations, debates and learnings that cross borders and build synergies in the world of writing and publishing. Don’t miss it.” 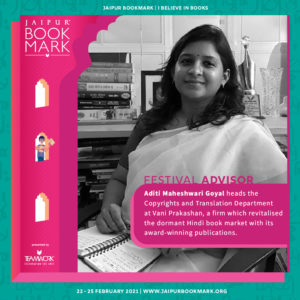 Publisher and JBM advisor Neeta Gupta said, “In this unprecedented year of the pandemic, what we have seen in the publishing industry in India is a tremendous amount of sharing and coming together — be it independent book-sellers, women in Indian publishing or Indian language publishers. It’s been a year of immense learning, and this will surely reflect in the changes to come in the industry.”

Publisher and JBM advisor Aditi Maheshwari Goyal said, “Jaipur BookMark has evolved into a platform that has kept the dialogue between the publishing industries of the world alive and kicking even during the pandemic. It gives me a sense of pride and humility to be associated with this great festival that has dedicated itself towards policy, technology, art, science and the socio-economic aspects of a book. We are presenting the digital avatar of the festival in 2021, keeping in mind the safety of the speakers and participants.”

Publisher and JBM advisor Naveen Kishore said, “JBM is a vital space for discussion, debate, conversation. Intimate, informal, often exploratory, and therefore, vulnerable; the encounters across cultures at our panels make it a living, evolving, essential platform for publishers. Welcome to community publishing at its hospitable best.”

Sanjoy K Roy, Managing Director of Teamwork Arts, producer of the Jaipur Literature Festival & Jaipur BookMark said, “The publishing industry worldwide was jolted by the pandemic. And yet, this opened up new opportunities to collaborate across boundaries and understand and share new writings, ideas and technology. Jaipur BookMark will explore this aspect, especially with our partners in the EU.”

Every year, JBM recognises excellence with some of the key awards in the publishing industry being given out at the festival: the Vani Foundation Distinguished Translator Award is given to a translator of Indian origin for his/her body of work in translating between two Indian languages and the Oxford Bookstore Book Cover Prize is given to the most striking and innovative cover design of the year.

Loving Learning – the importance of emotion in second-chance education

A book on Kalidasa & his wife Vidyottama authored by Dr. Kamal Kishor Mishra…