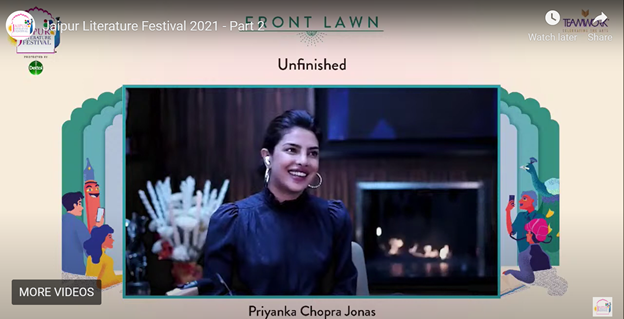 An intense day of conversations followed, with sessions on music, poetry, politics, science and India’s linguistic wealth. Some of the highlights included sessions on music across genres of folk, classical and popular; the First Amendment of the Constitution of India; the inspiring story of Kalbeliya exponent Gulabo Sapera; increasing political polarisation and its impact on democracy globally; the ancient Buddhist philosopher Nagarjuna and his ideas on the conjunction of science and philosophy; the challenges that Covid-19 has brought to the fore and learnings from pandemics of the past.

In a session discussing his book Moustache, JCB Prize for Literature 2020 winner S. Hareesh talked about the story of the book’s protagonist Vavachan. Through the protagonist, Hareesh weaves a picture of caste and gender politics in Kerala’s Kuttanad. Hareesh said that no Indian story can be told without writing about caste. “Caste is a way of life; it pervades everything we do. As an Indian writer, caste will be a part of your writing, whether you realise it or not.” Moustache won the JCB Prize for Literature 2020, and with the help of award-winning translator Jayashree Kalathil, the novel was able to reach readers across the world.

At another conversation, celebrated actress and international star Priyanka Chopra Jonas was in conversation with author and columnist Shobhaa De, discussing her recently released memoir Unfinished. From her efforts with the girl child, the evolution of how women are perceived in the entertainment industry, from issues like nepotism to the positive power of support from friends and family, Priyanka spoke candidly about her journey through life and cinema. During the course of the conversation, Shobhaa asked Priyanka about her efforts with the girl child and referred to “Chhoti” in the actor’s memoir. “Chhoti is a really important part of it because it shaped just the person I am and the idea of being aware of the world around you was inculcated in me through my parents,” Priyanka said. Sharing an anecdote about Chhoti, she said that Chhoti’s mother worked as a cook at the Chopras’ home and she couldn’t go to school so that her brothers could. This provoked and moved her and eventually led her to initiate the change, said the actor. “I am a daughter of the same country and my parents raised me with encouragement, having an opinion, with choices in my own life, and making decisions according to my desires, and here was a daughter of the same country who didn’t even have the idea that she had choices,” she explained.

The session “Asia Vision 2021” featured an energy-driven panel discussing the global significance of Asia, given that it included more than half of the world’s population. Vivan Sharan, Mihir S. Sharma, Parag Khanna and Shruti Rajagopalan spoke with Sajjid Z. Chinoy about varied subjects including economics, geopolitics, technology and the aftermath of the pandemic. When asked about the “Asiafication of Asia” and what it meant, Parag replied that the world was Asian – demographically, economically and in many other innumerable ways. Thus, “Asia needs to be further Asianised for Asia is most of the world”. He also talked about the collapse of the Soviet having led to the “intra-regional processes” that have caused a “deepening interdependence” of Asian markets. Sharan spoke about technological aspects highlighting that almost all countries had agreed upon the “free flow of data” across borders but with different governance strategies. On being questioned about global politics and the tussle between the USA and China, Shruti suggested that “the only way to deal with geopolitics is to act as if it doesn’t exist” since market economics was more likely to overpower its effects. Speaking about the impact of the pandemic, Mihir commented that it was difficult to know the magnitude of the setback that Asia shall face, when the impediments will come to the fore and how exactly they were going to play out.

At another session, senior journalists Edward Luce and Anne Applebaum, in conversation with Suhasini Haidar, attempted to unpack the complex idea of increasing political polarisation, shaking up established democracies around the world and discussed the reasons for this trend. Held, in partnership with The Week, the engaging session took the audiences on an exploration of the global recession of democracies. Haidar was also in conversation with John Micklethwait, the Editor-in-Chief of Bloomberg at a session concentrated on global power shifts and the necessity for a structural paradigm shift within governments, exposing giant lapses within governments across the world as they scrambled to battle the COVID-19 pandemic.

Exposing the deep fault lines within governments across the world in the face of the COVID-19 pandemic, author and journalist John Micklethwait’s latest book, The Wake-Up Call: Why the Pandemic Has Exposed the Weakness of the West and How to Fix It co-authored with Adrian Woolridge, offers both critical analysis and solutions.