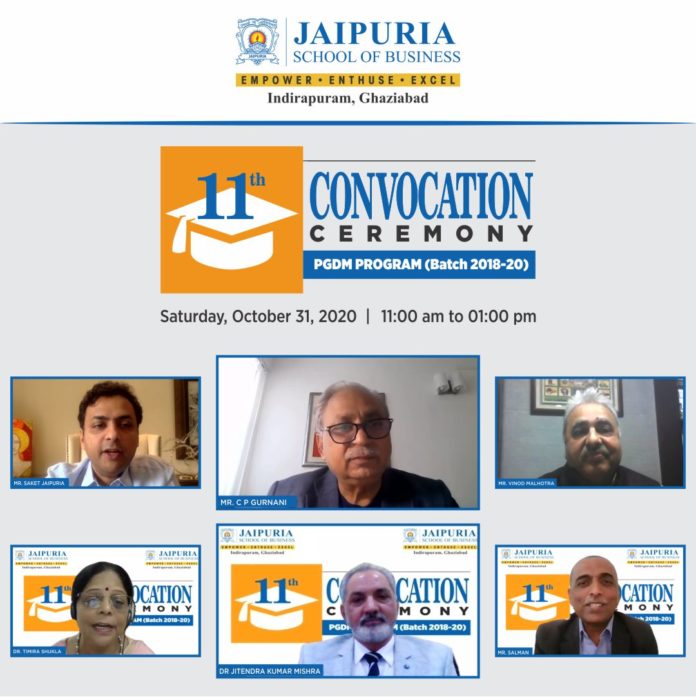 Noida: On 31st October 2020, Jaipuria School of Business hosted it’s 11th Convocation Ceremony for the Batch of 2018-2020. 88 students received their diplomas on the joyous occasion.

Sticking with tradition, the ceremony began with the lighting of the lamp which was followed by the director’s report by Dr. Jitendra Kumar Mishra, Director, Jaipuria School of Business. Medals were awarded to Rishabh Mishra, Gaurav Yadav and Sarthak Mittal, who stood first, second and third respectively, by Chief Guest Mr.CPGurnani, CEO & MD of Tech Mahindra.

A pledge was undertaken by the graduating students and their Post Graduate diplomas were conferred by Mr. Saket Jaipuria, Vice-Chairman, Seth Anandram Jaipuria Group of Educational Institutions.

Following which the students and attendees were addressed by Guest of Honour Mr. Vinod Malhotra, Advisor, Seth Anandram Jaipuria Group of Educational Institutions. On the joyous occasion, he addressed the students and said “I empathize with you today as you probably missed out on the festive part of this day where you would have been dressed up in beautiful gowns and capes. But I can assure you on behalf of the management, as and when the situation becomes normal we shall try to arrange a gathering. Be as it may, I really want you to keep on nurturing the nostalgic memories of the time spent at Jaipuria. And I sincerely hope you don’t break the umbilical cord with the institution.”

The students and attendees were also addressed by the esteemed Chief Guest, Mr. CP Gurnani, CEO and MD of Tech Mahindra. On the solemn occasion Chief Guest Mr.CPGurnani, CEO & MD of Tech Mahindra said “Congratulations to all the students, all the parents, all the professors and the founders. It is a pleasure to be with all of you on this very special day. I know the fun of meeting and being able to celebrate with the fellow students of Jaipuria School of Business would have been a lot more electric and energetic and no virtual meet could replace the touch of reliving the days of this beautiful journey.”

The students of batch of 2018-2020 have been placed in reputed organization such as TCS, Kotak Mahindra Bank, Airtel, BYJU’s, Spark Minda and ICICI Prudential to name a few.