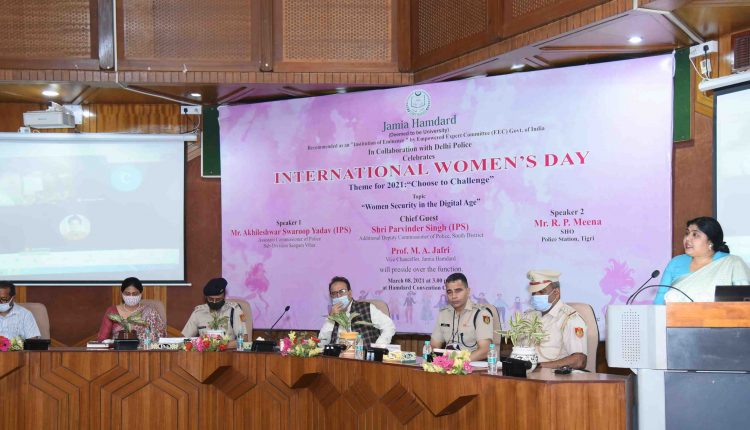 New Delhi: Jamia Hamdard celebrated Women’s Day on 8th March 2021 with a session themed ‘Women security in the Digital Age” in collaboration with the Delhi Police’. The event was held on campus with both online and offline participation.
The event was celebrated to show solidarity with the global concept of gender equality and equity. The global theme of the event was “Choose to Challenge”. The theme was selected to make awareness about the need of alertness among individuals and that one should be responsible for their own thoughts and actions and call out gender bias and inequity. The prime objective was to make aware the Jamia Hamdard teachers, staff and the students about the cyber crimes and how one can take up as a challenge not to be a victim of the cyber crime and use of ICT and social media safely.
The event was presided over by the Vice Chancellor, Jamia Hamdard, Prof M.A Jafri. Compering of the function was done by Dr Nishat Quddus, Assistant Proctor Jamia Hamdard. The Chief Guest was Parvinder Singh (IPS), Additional Deputy Commissioner of Police, South District and the invited speakers were Akhileshwar Swaroop Yadav, Assistant Commissioner of Police, Chandra Kanta, (IPS), Assistant Commissioner of Police and R.K.Meena, SHO, Tigri Police Station. The Dean Students Welfare, Prof Reshma Nasreen welcomed the chief guest, invited speakers, and the august gathering.

R.K.Meena, S.H.O spoke on the topic” Citizen services on Mobile Apps. He spoke about the various apps launched by the government to offer essential police safety services to the citizens, like address of the nearest police station and its staff. He further explained the objective of this service which aims to provide a smooth interface between the citizens and the police. His talk educated the audience about the various apps which have been made available online by the police for safety. This would be certainly useful to us today and in the future.
Akhileshwar Swaroop Yadav in his speech, spoke about “Security and Safety of Women” and urged people to be alert while in traffic and use mobile phones carefully and minimally during that time.
Chandra Kanta, ACP (Women’s cell) spoke about the importance of self confidence, education and self development in a women’s life and that a confident and educated mother can imbibe the meaning of confidence to her children. A woman should be aware of their rights and duties.
The chief guest, Parvinder Singh (IPS), spoke about cyber crimes and cyber safety. He also stated that one should never let technology domesticate themselves. We should judiciously and carefully make use of cyber technology and social media and avoid falling prey of cyber crimes.
The Presidential remark was delivered by the Vice Chancellor, Prof M.A. He expressed his willingness for Jamia Hamdard to celebrate International Women Day every year. The vote of thanks was delivered by Prof Sarwar Alam, Chief Proctor, Jamia Hamdard.
It should be noted that International Women’s Day is observed every year on March 8 to celebrate women, their rights and their achievements. IWD began in the 1900s, and according to its website, “a global day celebrating the social, economic, cultural and political achievements of women. The day also marks a call to action for accelerating women’s equality”. International Women’s Day has been celebrated for over a century now, the first official celebrations of International Women’s Day happened in 1911, when women from several European countries (Austria, Denmark, Germany, and Switzerland) participated in demonstrations.