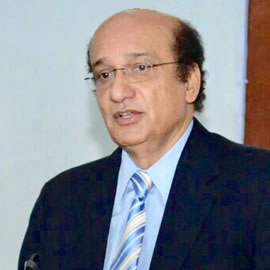 New Delhi: Jamia Hamdard Pro Vice-Chancellor Prof Ahmed Kamal has been named among top 2% scientists globally in the subject-wise analysis conducted by a team of Scientists at the Stanford University USA which was led by Dr John PA Ioannidis. The database has been published in one of the highly rated journals PLOS Biologyon. The analyses used citations from Scopus with data assessing scientists for career-long citation impact up until the end of 2019 and for citation impact during the single calendar year.

Prof. Ahmed is also ranked among the top 0.10% Scientists in India with 537 papers publication and with a worldwide subject rank of 83 globally and 2nd in India in the subject of Medicinal and Biomolecular Chemistry.

The Stanford University Scientists have created a database of over 100,000 top scientists of the world on the basis of standardized citation indicators such as information on citations, H-index, co-authorship and a composite indicator. All of these scientists were classified into 22 scientific fields and 176 sub-fields. For analyses of the citations and the composite indicators, SCOPUS data provided by Elsevier was used with data freeze as on May 6, 2020.

Vice-Chancellor Jamia Hamdard, Prof Seyed Ehthesham Hasnain congratulated Prof Kamal for bringing laurels to the University and appreciated the efforts put in for research publications which led to this notable achievement.

Prof Kamal research interests mainly focus on the design and synthesis of gene-targeting compounds as new and novel anti-cancer agents, and their targeted delivery as pro-drugs. New chemical entities for anti-tubercular and anti-malarial activity are also his research avenues. He is proficient in development of new efficient synthetic methodologies including solid phase, resin bound reagents and chemo-enzymatic strategies that are useful in both basic and applied pharmaceutical chemistry.

He has filed over 368 patents and five of his US patents have been licensed to a pharmaceutical company for their clinical development.