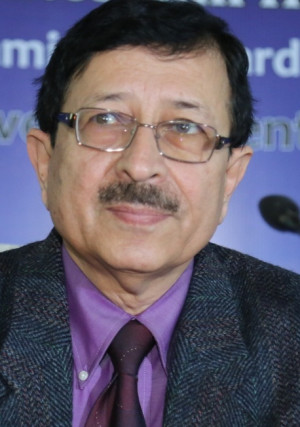 New Delhi: The Vice-Chancellor of Jamia Hamdard Dr. Seyed Ehtesham Hasnain gave a webinar on “COVID-19 and the lessons to be learnt for Science and Society” which was organized by Amity Institute of Virology and Immunology.

The webinar focussed on the science behind the global pandemic, what all should be interpreted by the people and what to expect from the disease and how to tackle it. It was aimed to give a comprehensive understanding of the various stimulus measures taken up by global scientific community and took stock of the issues and challenges being faced by Indian across sectors.

“This pandemic has touched human lives and is truly unprecedented. Never before in the history of humanity has any threat disrupted every domain of our existence. It has attacked at the very notion of Man — The Social Animal!” says, Dr. Ehtesham while also stressing the fact that we are being saved by non-drug interventions such as quarantine, social distancing, handwashing, and – for health-care workers – masks and other protective equipment.

He highlighted that the greatly reduced COVID-19 infection burden and even mortality seen in many parts of the world where BCG (Bacillus Calmette-Guerin) vaccination has been the widely used practice, may not just be a coincidence. BCG was originally developed against Tuberculosis (TB) and this hundred-year-old TB vaccine offers broad protection and sharply reduce the incidence of respiratory infections. Three weeks after the pandemic was declared by the WHO, it is increasingly clear from the Covid-19 data that countries which have been practicing universal BCG vaccination are relatively giving a better to fight to SARS-CoV-2 which could be BCG’S “trained immunity” effect.

Speaking on the effect on Covid-19 on body he was quoted saying, SARS-CoV-2 is “a ferocious rampage through the body, from brain to toes” as per a recent report in the journal Science. The disease can attack almost anything in the body with devastating consequences.

We are all hoping for a vaccine in 2021. But what do we do in the meantime? And more importantly we will have to live with the threat of coronavirus “for the foreseeable future” and adapt accordingly because there is no guarantee a vaccine can be developed immediately. The biggest lesson that we learn out of the COVID-19 pandemic is to be remain protected indoors, distancing socially.

He talked about the 3 ways how Science will get us through the COVID-19 Pandemic:

The modern frontiers: Within just weeks of the first reported case, scientists had not only identified by microscopic the virus responsible for the disease, but had sequenced its entire genome.

The curiosity-driven foundations: There is value, intrinsically, to knowing something about any aspect of the natural world. The curiosity-driven research of evolutionary virologists, of disease ecologists, of biophysicists, and scientists across many other fields of inquiry not only informs clinicians and policymakers, but also every cutting-edge piece of research at the frontiers of the field today.

The edge of fundamental:

This is the most powerful knowledge in all of science; the fundamental limits of what’s physically possible. Scientists are constantly working to push the limits of what’s known. Scientific investments need to occur not only on the front lines of the current crisis, but on a wide-variety of curiosity driven, frontiers including at fundamental level itself.

Scientific lessons to be learnt from Covid-19

• Covid-19 early genome annotation led to key knowledge transfer allowing vaccine developments and efforts in drug design.
• However, some neo characteristics of Covid-19 has left a void and could be addressed by thorough interventions.

We are living in extraordinary times that call for united efforts, as these problems are much too complex in magnitude and scale for anyone to solve alone. The “Information Storm” that COVID-19 is raising globally is rather difficult to cope with, According to Prof Hasnain.

The Vice Chancellor flagged the important leads from his research group working at the JH Institute of Molecular Medicine. His was one of the earliest study that showed that the SARS-CoV-2 has very high transmissibility and that SARS-CoV-2’s inherent feature of viral aggregation increases it’s survivability and fitness, a property that will likely help in viral persistence and becoming endemic.

Analyses of about 4000 clinical isolates of SARS-CoV-2, including 25 isolates sequenced in India (largest such comparative study ever done till date globally), showed that Indian isolates are not unique, they all cluster along isolates from other continents, Europe and North America highlighting spill over from these nations. Mutation analyses revealed highest variation in Spike, Envelope protein and ORF1a and that each amino acid in constituent ORF’s has undergone mutation – an observation which has major Implications in diagnosis and vaccine development. He also flagged the low infection and mortality figures in India and wondered at the possibility of this to be BCG’s ‘Trained Immunity’ effect.

• He finally drew the attention to the impact on the pandemic in global politics. Quoting a world body he highlighted the prediction about famine in over 3 dozen Countries.

• Quoting another New York Times Columnist ‘This pandemic is bringing another with it: More suffering is ahead for the developing world’, he concluded his talk by referring to a statement by a Senior Advisor of a Paris Think Tank that “America has not done badly – it has done exceptionally badly” and concluded with a recent article in NYT that COVID-19 pandemic is shaking bedrock assumptions about US exceptionalism and the likely global leadership void waiting to be filled.

Dr. Seyed Ehtesham Hasnain , is currently the Vice-Chancellor of Jamia Hamdard and is a scientist, an institution builder, policy maker, and an administrator. He taught at Delhi University, worked at the National Institute of Immunology, New Delhi and was the first Director of Centre for DNA Fingerprinting and Diagnostics (CDFD), Govt of India and made CDFD a gold standard for DNA based crime investigations in the country. He is also the recipient of the Padma Shri (Civilian Award) from His Excellency, the President of India and received Germany’s Highest Civilian Award – The Order of Merit (equivalent to India’s Bharat Ratna), from the President of Germany, the only Indian so far and one of the very few persons globally.

As the 7th Vice Chancellor of the University of Hyderabad, he made it the #1 University of India displacing JNU and DU for which the then Prime Minister of India gave the PURSE Award.

He is well known internationally for his research on Mycobacterium tuberculosis, the TB causing bacterium, and has 250+ publications in peer-reviewed journals of high impact, and dozen patents globally. He was an Invited Professor IIT Delhi where he taught, and currently is a Professor at Jamia Hamdard Institute of Molecular Medicine where he leads an usually large group of post-Docs, PhD students, and others – supported generously by peer reviewed grants from different funding agencies.