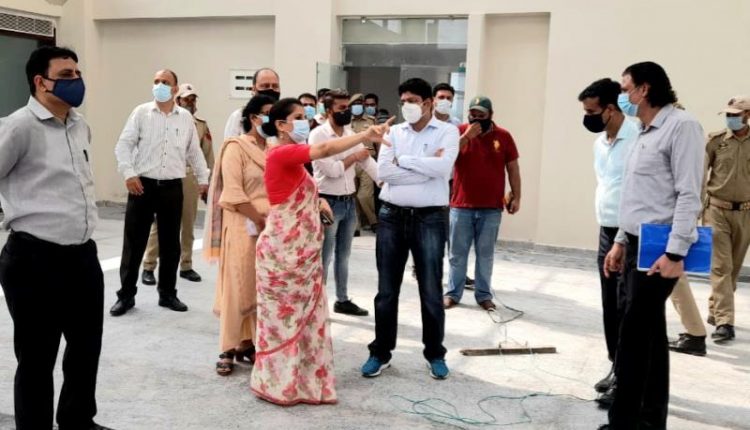 Pertinently, the place was rechristened under Government Order No. 146 IND of 2021, dated, 13-7-2021 renaming the J&K Trade Facilitation Centre, Exhibition Ground, Jammu as ‘Jammu Haat’. As per the vision & directions of the Lieutenant Governor, this mega facility would be used to promote handicraft, handloom and industrial and allied activities in the division.

During the site visit, the Divisional Commissioner along with officers took a round of each floor of the building and inspected the progress of work and facilities developed there for artists and traders.

The concerned engineers apprised the Div Com that over 90 percent work has been completed, while remaining allied works are in progress. It was further informed that as per the directions of the office of the Lieutenant Governor the pace of work has been expedited.

The Divisional Commissioner directed the executing agencies to expedite the pace of progress for early completion of the project in all respects so that it would be dedicated to the public at the earliest.

The MD, Trade Promotion Organization, while giving details of the floor management and facilities in the building, apprised the Div Com that the basement is kept for parking of vehicles besides spaces have also been created for exhibition of handicrafts, Handloom & Industrial products of entrepreneurs with emphasis on ODOP. The space can also be utilized for buyers- sellers meetings organized by various line departments for interstate as well as export oriented promotion of local products. The shops to be allotted on rotational basis to registered manufacturers/ service sector/ industrial units/ PMEGP units/ startups to promote their products, spaces for women entrepreneur development institute for undertaking various development schemes for the women entrepreneurs, the MD added.

Moreover, adequate space will also be utilized for housing training centres/ labs /libraries. Jammu Haat also has the facilities of a conference/Exhibition Hall which has been developed in a thematic manner to promote local industry.

The Div Com said that the Jammu Haat will showcase the rich, varied handicraft tradition of the region and provide market support to local artisans and weavers for promotion of local products. He said with the opening of this facility it will become a major tourist attraction in Jammu.

The Div Com instructed the Director Handicraft & Handloom to explore the possibilities for developing more such facilities. He suggested opening outlets on National Highways, routes to pilgrimage sites like Shri Mata Vaishno Devi route and routes to tourist destinations.